When I walked into Tony’s on Nogalitos Street, my eyes didn’t know where to begin. Rows of masa balls were lined on a tray that sat next to dunes of flour. One by one, a cook loaded the balls semi-flattened in an industrial tortilla press, cranked it, and out spat the dough disks onto the flat top griddle. Other cooks cranked out the taco orders.

Above the cooks loomed a jumbo menu that listed the dozens of tacos and plates, burgers and tortas, and that touched the high ceiling. On it, a cartoon of a little Mexican dude in a sombrero and chanclas.

What I didn’t see were tables. This is Tony’s “Tacos To Go,” after all. But there were stainless steel countertops along the windows for dining in.

Tony’s resides in what used to be a Piggly Wiggly grocery store, according to a framed newspaper article on the wall. The interior looked historic; it’s easy to imagine a 1950s neighborhood grocery in this space. I fell in love with the interior as soon as I set foot in it. It happens that the staff was super friendly. Usually, people stare at me as I take pictures. Here, I was a fly on the wall — they didn’t mind.

Tony’s serves very, very good tacos with very good flour tortillas, which are more doughy and on the thicker side. Nothing cold is being put into these tortillas — the other half of the griddle is used for cooking some of the fillings, while the pre-made stuff like carne guisada and beans stay hot in warmers. The tacos steamed greatly when we unwrapped them. Also, the red hot sauce is worth noting — some mix of red chiles in oil. Like the fire oil ubiquitous at Chinese restaurants, handle with extreme care. 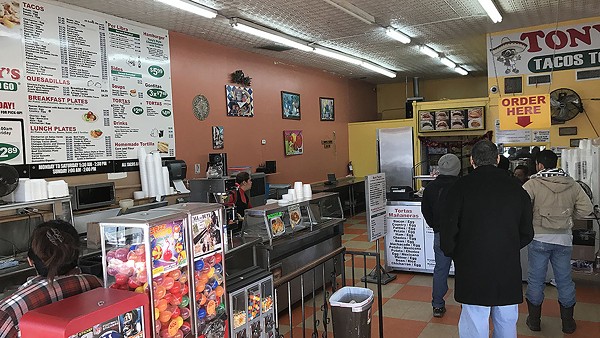 The chicharron in salsa verde is not to be messed with. They’re not cooking the skins in some piddly tomatillo sauce — this is straight up Serrano pepper, ma’am. Spiciness aside, this taco was delicious in its simplicity as the pork flavor really came through.

The chilaquiles were super cheesy, the egg and its other ingredients piping hot, and the tortilla strips semi-crunchy. The carne guisada was stewy and wonderfully messy with meat cooked to perfection. To make the country a la Mexicana, they cooked the pico de gallo on the griddle, which was nice, and whatever sausage they were using was top-notch. The bean and cheese on corn was more cheesy with the beans serving as the foundation.

The barbacoa was very good and a tad on the greasy side, which is going to happen. I really liked the corn tortillas here. They are simple, soft, heavy, light in color and not overcooked like many seem to be. They are the perfect conduit for the meaty barbacoa, the ideal relationship between tortilla and filling.

Most of these tacos at Tony's don’t need hot sauce. The aforementioned red is provided along with a light green that’s probably jalapeño, garlic and cilantro pureed in oil.

I had a similar experience walking into Tony’s as I did walking into Kreuz Market in Lockhart. There, walking into the smoke room where you also order is like walking into barbecue church where I always keep my voice down out of respect for the smoked meats. Tony’s is a place of worship, too, but it’s more like those nondenominational iglesias on the West and South sides that inhabit deteriorating one-story buildings and that stay open late — more raucous but still reverential toward the religion that is the breakfast taco.