Since starting up operations in 2012, Kelly Meyer and his crew at New Braunfels Brewing Co. have been making beer “their way.” Made with 85 percent wheat, fresh hops, house yeast, locally-sourced water, and a ton of attitude. With a line of saurs, “Fun-damentals,” elementals, and experimentals, they are forging a path that is truly unique in the local craft beer world.

“We came up with our style basically through trial and error,” Meyer said. “We had a good six or seven months in the beginning of no production since we had to break down and sell off the 60-barrel system we originally had. The last batch from that old system, we left the top off and open to the elements and that is basically the culture of all our saurs. You are literally tasting downtown New Braunfels in all our beers, for better or worse.”

“Essentially, this clown thinks he speaks for all of Hinduism and instead of coming and talking to me about his concerns, he released this press release to everybody,” Meyer said. “The local Hindu temple responded to it and they said that basically because this is beer, it is unacceptable."

A spokesperson for the San Antonio temple told the Express-News he shared Zed's sentiment.

“We consider Shiva the creator of the universe,” said Reddy Yeluru of the San Antonio temple. “When somebody’s talking about your creator, like your Mom and Dad, we feel offended. If it were associated with a good thing, we wouldn’t feel bad. But alcohol has a bad connotation.”

In typical Meyer fashion, he sloughed it off and kept right on brewing.

The beers that Meyer is putting out are far and away the most unique in the area – and unique is a good thing. In the next few weeks, they are releasing a slew of new brews onto the world. Their newest is what they are calling New Braunfels Best, a collaboration beer with Guadalupe Brewing Company.

“They have a honey ale that finishes a little bit sweet. In talking with them, I said they should do a saur version of it. They said they didn't want to do that so I said we would do that for them. They gave us their wort and we fermented it in a barrel and we added our Blondine on top of it. It's a blend of our Blondine, their honey wheat, and fermentation. It's something special and we haven’t even sold it beyond our brewery yet,” Meyer said.

This beer is familiar enough for it to be a good gateway into what they are brewing there, yet different enough for it to stand out against the myriad other beers on the local scene. Also one that will be familiar to the senses – but not in terms of beer – is their Sunset in Nirvana. This beer is everything in the toolkit thrown together, with hints of cinnamon, vanilla bean, green tea, and citrus. This thing dances across your tongue, hitting every taste bud along the way.

The beer starts off with an 8 percent of New Braunfels Brewing Co.'s weienbach, then is fermented with NBBC's saur culture along with Saigon cinnamon, Madagascar vanilla, Taiwanese oolong tea, and oranges.

"It's basically everything I like added into this beer," Meyer said. 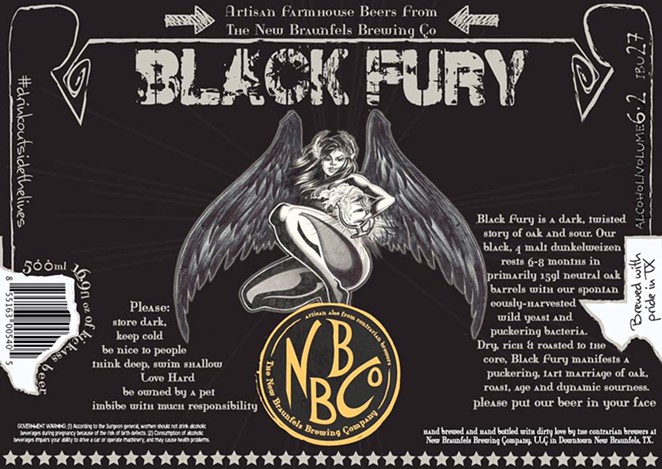 While this stellar beer is only available for a short time at the brewery, a pair of barrel-aged wonders are soon to be hitting spots all over S.A. Their Black Fury is an aggressively sour beer made in the dunkelweizen and Schwarz style. This rocket-fuel-like brew has all the great notes of classic dark German beer combined with the oakiness you can only get from barrel aging and it has to be tasted to be believed. It's chocolatey and tart and good.

“Black Fury is probably the most challenging beer we've done,” he said. “A lot of people have tried this, but they've never tried this version of it. This year, I think we've figured out what we're doing. On a little side note, we're releasing this in time for the inauguration with Cullum's Attagirl. They're doing a little tongue-in-cheek [event] where they are tapping Black Fury and serving it with fried chicken.”

Also on tap is their aptly titled Very Seldom Naughty. This aromatic, wine-centric beer is a blend of their hefeweizen and white wine. It is frankly unlike anything else I have had from New Braunfels Brewing Company and it is outstanding. For those who aren't hardcore fans of their saurs, this beer is one you have to try.

“Very Seldom Naughty came out because I also enjoy drinking wine,” he said. “This is made from lees, which are basically the skins of white wine grapes and yeast sediment. We blended that with our hefeweizen. It is a little sweet, a little juicy, and we will have these in SA  in about a week.”

Though I didn't get to try this one, fans of their now infamous PKL FKR will have a new beer to champion as the Olive FKR (made with, yes, olive juice) will be released on January 21. It will definitely be worth making the trek up to Comal County for that one.