This is blasphemy, I realize, as a native Texan, but bigger isn’t always better. Like those Mexican plates that come with three cheese enchiladas, and the chalupa, and the gordita that sits on the beans because there’s no more room on the plate, and the rice — all squished together — two flour tortillas in a warmer on the side. You don’t have to finish the whole plate!

With breakfast tacos, sometimes the tortilla is too big. I prefer regular-sized tortillas that are filled three-quarters of the way with whatever — carne guisada, bean and cheese, etc. A taco that’s manageable, more crafted. With the extra large tortillas, you inevitably tear away the edges because, and end up with a pile of scraps.

These are the kinds of tortillas being served at Los Laureles on inner West Avenue. Size aside, they are about your average flour tortillas in terms of taste.

Overall, the tacos were pretty good. 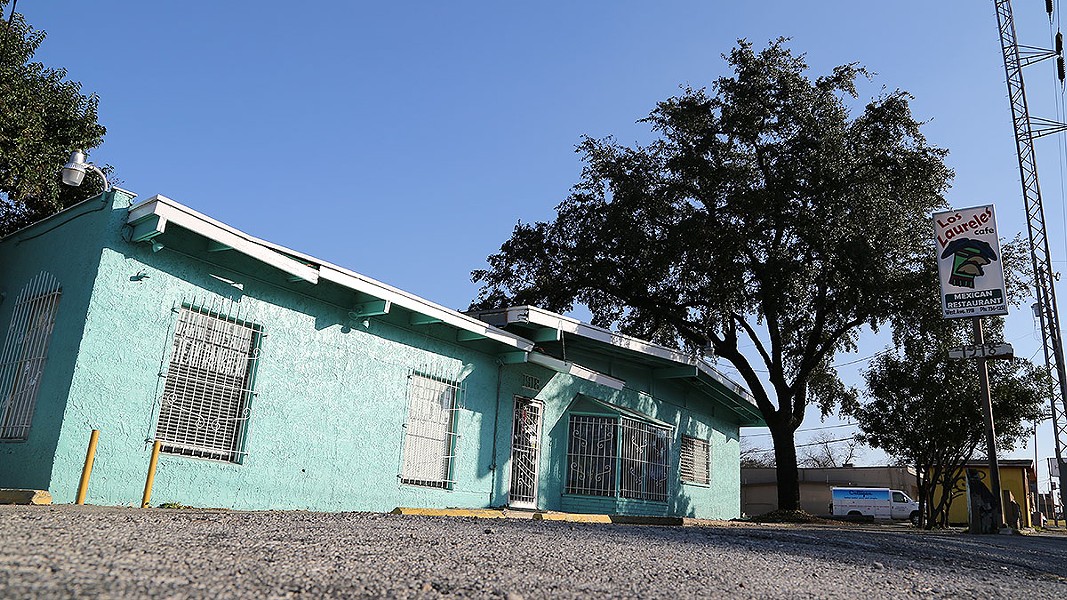 The papa ranchera was chaotic, all thrown together. The potatoes looked like they were once cooked to perfection with crispy edges but were just now being used. So, on the soggy side. Texturally, not the greatest start. However, the ranchera sauce was very good. It had that pureness of any tomato-based sauce, almost like a really good and simple pasta sauce. Comforting. An actual sauce, but then like a fresh pico de gallo added as another layer. Adding the house green hot sauce here would be a mistake. And again, way too much tortilla, but what are you going to do?

The bean and bacon on corn had very, very good beans. They were watery — less mashed and almost whole — but had a pure bean flavor and seasoned just right. The bacon was bacon so, yes, it tasted fantastic. The corn tortilla was huge, like its flour brethren, and thin and crispy on the edges.

The chilaquiles was another monster. Usually, a taqueria gives you a smaller portion, like a taco portion. This one seemed like an entire chilaquiles breakfast plate in a tortilla. Good crunchy chips. Nice egg ratio to the other ingredients. Somewhat average.

The machacado and egg had really good beef flavor. Not chewy, but kind of crunchy. Hot egg. Oddly, I found a few chips in there which immediately inspired the macha-quiles. I’m serious. How cool would that be? This machacado needed more seasoning, and had such little portion as the tortilla blanketed the machacado/egg mixture.

Overall, Los Laurles serves respectable tacos. I really liked that ranchera sauce in the papa ranchera. And how about that macha-quiles? Let’s start a movement, but on regular-sized tortillas please.