Unique Flavors Emerge From Pedro's on the West Side

Walking into Pedro’s Cafe on the west side had me worried. No West Side taqueria should be this empty, especially on a Saturday morning.

Then I ate the tacos. It can’t be the food, I thought. My fellow taco critic, aka The Palate, didn’t seem as enthused but I thought the tacos were consistently good across the board. At times, they even produced some surprisingly tasty flavor combos I had never had before.

One such combo was the country a la Mexicana on corn. The diced veggies were grilled to the point that they were caramelized. This sweetness complemented the smoky sausage well in a toasty corn tortilla — not burnt — an excellent amalgamation of flavors. 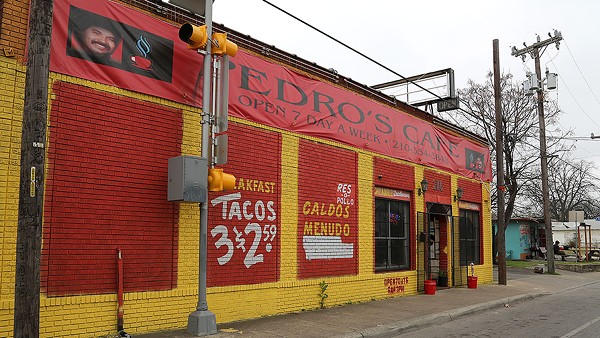 Even wilder was the ham and egg on flour. Seems a bit banal for San Antonio. The egg was overcooked, but not ruined. Then we added the cinnamon-y green sauce and — OK, I’ve never tasted that before. That’s right. The green sauce, which was either jalapeño or serrano, had a note of cinnamon. And it went well with the ham. Like a warm and spicy taco.

The papa guisada was another mini revelation. What’s the difference between this taco and papa a la Mexicana or papa ranchera? I have no clue. This sauce seemed like a thicker ranchera sauce, which is basically tomato, onion and pepper cooked 'til mushy. This one had a distinctive garlic flavor. And these potato cuts were smaller instead of the larger chunks that sometimes don’t fit in a tortilla.

Another hit was the carne guisada, whose stew had a lasting flavor and whose meat was tender. I couldn’t get a read on the beans in the bean and cheese. (I know, I have one job.) The bean and chorizo had good flavor but was too greasy.

So why the nearly empty restaurant on a Saturday morning in the heart of the West Side? These tacos didn’t suck. In fact, some of them were very, very good. The flour tortillas weren’t the greatest of all time, but they had that pliability and softness that I always look for.

If you’re in the neighborhood, drop by Pedro’s. Maybe you can tell me.