Cascarón Confusion? Your Guide to All Things Fiesta

by Jessica Elizarraras and Bryan Rindfuss

April 20, 2017 at 6:07 PM
comment
The biggest party of the year is here and even native San Antonians need a refresher when it comes to Fiesta must-haves and must-dos. Aside from urging you to hydrate, stock up on sunscreen and cash, here’s a quick explainer on what you should know about San Antonio’s largest celebration which runs from April 20-30.

Medals
The earliest version of medals came by way of King Antonio in 1946, when the faux-royal handed out commemorative coins, according to Henry Graham’s “History of the Texas Cavaliers.” Fast-forward to 2017 and medals are one oFiesta’s hottest items. Made by non-profits to help fundraise, companies to get the word out, or locals trying to one-up each other’s designs, nabbing medals has grown into a mania led by the Fiesta Medal Maniacs which, command the attention of more than 12,000 followers on Facebook and Instagram. This year’s most sought-after trinket? A loteria-inspired Donald Trump medal that’s helping keep Fiesta great. Check out our video with the Maniacs below:


Cascarones
Though origins are murky, cascarones are a staple during Fiesta traditions. Buy them from your local H-E-B, roadside stands or Fiesta on Main. Finesse is mandatory: Crack them in your hand and sprinkle the confetti guts over your victim’s head. We’re still civilized, even if it’s Fiesta.

The Three Kings
Although not quite as wondrous as the Three Wise Men, the three kings of Fiesta still come bearing gifts each year in the form of charitable contributions to local nonprofits. Established by the Texas Cavaliers in 1927, King Antonio is tasked with raising funds for children’s charities before appearing at schools, military bases, hospitals and events throughout Fiesta. Initiated by LULAC in 1947 with a goal of raising scholarship funds for underprivileged youth, El Rey Feo officially joined Fiesta in 1980 and serves as “The People’s King,” similarly going beyond parades and parties to visit nursing homes, schools and hospitals. Since his first appearance at Cornyation’s debut (1951’s Court of the Cracked Salad Bowl), King Anchovy has evolved into a key Fiesta figure who rules over a riotous court during three nights of costumed satire benefiting local AIDS charities and theater arts scholarships.

Coronation Gowns
Since 1909, The Order of the Alamo has crowned its own Fiesta royalty at Coronation — a glitzy affair showcasing a Queen, Princess and 24 Duchesses donning elaborate dresses and trains encrusted with beads and rhinestones. Often weighing between 60 and 100 pounds and costing $35,000 or more, the royal robes follow specific court themes ranging from birds and flowers to museums and the military. While Coronation seats are admittedly “very limited to the public,” theses showpieces can often be experienced firsthand at The Witte, which recently unveiled “Natural Beauty: Fiesta of Land, Water, and Sky,” an exhibition of gowns inspired by Texas landscapes.

Accessories
Where to start? If you’re collecting medals, you’ll want to showcase your finds across your chest. Don’t ruin a well-made guayavera — get a sash, available at most Fiesta shops including the official Fiesta Store off Broadway. It gives you plenty of room to store your scores and makes you feel like royalty. Need shade from the ever-present sun that’ll beat down on you come sundown at Taste of New Orleans/NIOSA/Oyster Bake or during the daytime parades? Fashion yourself a hat: the bigger, the better. Head to Amols’ or Michael’s and clear them completely out of their brightest tulle and glitter. Paper flower crowns are also an “it” accessory. Score one from Market Square, El Mercado, or make your own. If the whole extraness that is Fiesta hasn’t quite struck you yet, if you’re not a hat person, if you’d rather show off new kicks than tackle the arduous task of pinning several dozen medals to a vest, show San Antonio your shoes. The tradition directly relates to the Queens and princesses who often wear decked out sneakers, boots or other footwear under their beaded gowns. 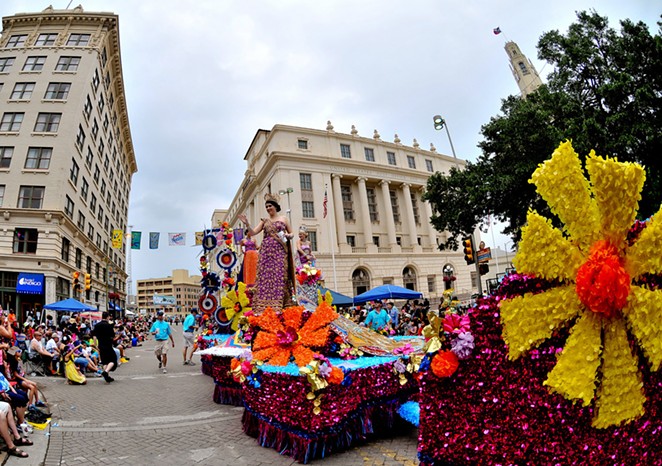 Parades
At the very center of the 10-day celebration, Fiesta’s parades run the gamut from traditional reverence to whimsical and wacky. If you can only attend one, most would point you toward the Battle of Flowers Parade (April 28), the over-the-top procession that sparked Fiesta itself back in 1891. Produced entirely by women and designed to honor the heroes of the Alamo, the beloved tradition brings together all the hallmarks of Fiesta for a procession through downtown featuring elaborately decorated floats, decked-out royalty, ROTC units, local celebs and marching bands. Fiesta fanatics, however, will tell you to attend as many as possible — including the Texas Cavaliers River Parade (April 24), the wildly illuminated Fiesta Flambeau Parade (April 29), the dog-centric Fiesta Pooch Parade (April 29) and the wonderfully wacky King William Fair Parade (April 29).

A Night In Old San Antonio
Bring comfortable shoes, plenty of cash and make sure you’ve got a meeting spot in mind when heading into La Villita for NIOSA. The 69th presentation of this beloved bacchanal features 15 cultural areas filled with foods from across the globe, plenty of cerveza and the newly added craft beer booths with kegs full of Ranger Creek and Busted Sandal’s Finding Friday cans. Proceeds of the volunteer-led four-day festival go toward the San Antonio Conservation Society. Don’t miss new food items such as chamoyadas, or the classic Bongo-k-bobs, Maria’s Tortillas or sausage sampler. Stack your beer cups to keep track of your liquids. $12 advance, $15 at the door, free for children 12 and under, 5:30-10pm, April 25-28, La Villita, 418 Villita St., (210) 226-5188, niosa.org. 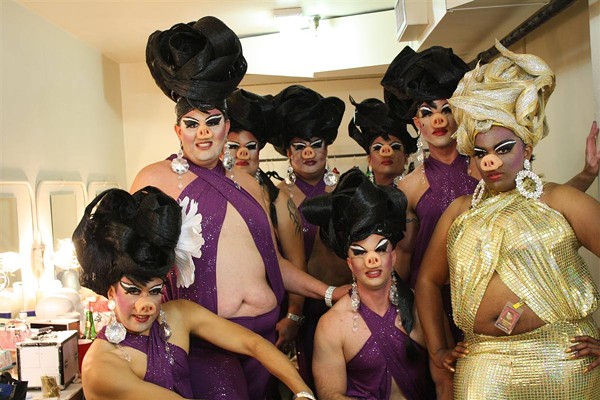 Cornyation
Launched in 1951 as a spoof of the Coronation of the Queen of the Order of the Alamo, Cornyation has evolved into a bawdy, all-encompassing satire that’s raised upward of $2 million for AIDS charities. Stepping into the royal role of King Anchovy LII, Jeffrey James is set to rule over Cornyation’s Court of Insane Privilege during three nights of outrageous lampoonery. $15-$40, 7pm & 10pm April 25-27, Charline McCombs Empire Theatre, 226 N. St. Mary’s St., (210) 226-3333, majesticempire.com.

Fiesta Gartenfest
Beethoven Maennerchor turns a spry 150 with its mission of preserving the German language and culture with another bash. Pack the dirndl and lederhosen, grab your favorite stein and join the festivities that spans three nights. With polka, German choirs, pitchers of Spaten, bratwurst, potato pancakes and more. $3 in advance, $5 at the door, free for children 12 and under, 5 p.m. April 26-28, Beethoven Maennerchor, 422 Pereida St., (210) 222-1521, beethovenmaennerchor.com.

Fiesta Oyster Bake
The campus of St. Mary’s University turns into fairgrounds for student-run food booths (chicken on a stick is a must), a carnival and live music that spans all genres. The party starts at 5 p.m. on Friday April 21 with performances by the Ying Yang Twins. Or make it a day-long affair on Saturday when doors open at 11 a.m. Did we mention oysters? Freshly shucked, on the half-shell or flash fried, you’ll want to partake in the namesake snack. $25-$35, 5-11pm Friday, 11am-11pm Saturday, St. Mary’s University, One Camino Santa Maria, (210) 436-3324, fiestaoysterbake.com.

King William Fair
From humble beginnings as a one-block art exhibit back in 1968, the King William Association’s signature Fiesta event has grown into a can’t-miss festival spread throughout the historic neighborhood. After kicking off with a wonderfully wacky parade, King William Fair fills the tree-lined streets with a wide assortment of artsy vendors, diverse live music on multiple stages, dozens of food booths (gyros, gorditas, pizza, cupcakes, you name it), craft beer and margaritas, plus an ever-popular Kid’s Kingdom equipped with rides, games and crafty activities. $10, free for kids 12 and under, 9am-6pm Sat, April 29, King William Historic District, (210) 271-3247, kwfair.org.