After 30+ Years, Betty's Battalion Is Teaming up with Familiar Partners

There's no way Betty Ford breaks the 5-foot mark. But that wee ma'am from West Texas has commanded the corner of Grayson and New Braunfels Avenue in front of Fort Sam for the past 31 years inside what Texas Monthly called one of eight great dives in the state as recently as December 2016.

For the uninitiated, Betty's sits on a sleepy strip center, and its exterior promises divey insides. But once inside, after your eyes adjust to the dimly lit space, there's plenty to find inside this warm bar. All manners of military regalia can be found from sailor hats to T-shirts to banners and flags — even a parachute. Bamboo plants give way to faux rock lamps and old-school beer neon signs. And the sweet smell that lingers? A Yankee Candle that burns of sugar and spice that Ford lights for la virgen de Guadalupe.

But a cancer diagnosis and recovery later in recent years made Ford realize she needed a hand managing the 31-year-old beer haven. She turned to one of her regulars, Danny Delgado, for said help. 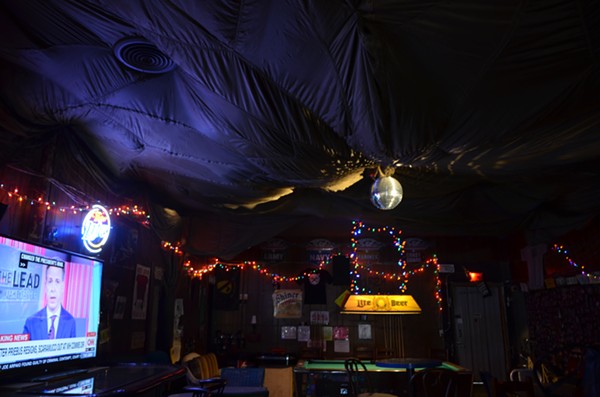 "I approached Danny. I know he's...I just think he'll do good for the bar because I'm not going to be here forever," Ford says.

Delgado's name might sound familiar and it should if you've partied anywhere along the St. Mary's Strip within the last seven years. At 28, Delgado opened Hi-Tones and, with a slew of partners, he has since gone on to open Faust Tavern, La Botanica, Phantom Room (which should be making a comeback in the coming months), Lowcountry, The Squeezebox. With three more projects on the horizon including Con Safos at Yanaguana, there is no doubt about it — Delgado is a bar whisperer.

For his partnership with Ford, Delgado's bringing in Linda Ynclan and Laura Rocha, who formerly managed Phantom Room and Hi-Tones as partners.

But aside from new faces and a some reorganization of seating, and a possible paint job for the gazebo, the two biggest and perhaps only changes will be the addition of liquor and new hours.

"We're bringing in liquor and because Betty's never had that," Delgado says. "It's new and thats one of the biggest thing that keeps people out."

"I remember when people down the hill used to come up here to drink and now from up the hill they're going down because there's liquor there," Ford says.

Mixed drinks will be available, and while Ynclan and Rocha know how to shake up cocktails, those won't be making it to the menu any time soon. Ford will stick around during day shifts, and learn how to handle the new payment system.

"It's going to be a learning process for her, too," Delgado says, as Ford quips, "I don't know anything about liquor!"

Otherwise, Betty's Battalion, which Ford leased at $250 a month in late 1985, will purposefully remain the same. The wall of fallen Special Ops personnel stays, so does the parachute, the rock lamps, the T-shirts, and the sailor caps. The bar will still service the military servicemen and women who have made it their home for the past 31 years.

Ford opened Betty's in the post-Vietnam War era with a vision and plenty of potential.

"People used to turn up their nose at the military. I wanted to have a place where they could come. I knew what I was getting into when I opened this. They all welcomed the bar, and I welcomed them," Ford says of the homey bar people describe as "comfy."

Of course, patrons wanting to experience a bit of old school San Antonio will make their way to Betty's Battalion. They already have. But Delgado wants to hang on to that San Anto feel.

"I'm hoping [people come]. We've let people know on the down-low, I've brought a lot of people here and they love the place," Delgado says. "It's a San Antonio staple and a place like this needs to go on for a while. I've seen what's happened to the old school bars in San Antonio and for me this is history."

Expect a soft opening for Betty's Battalion on August 10 with a grand opening the weekend of August 11 and 12.