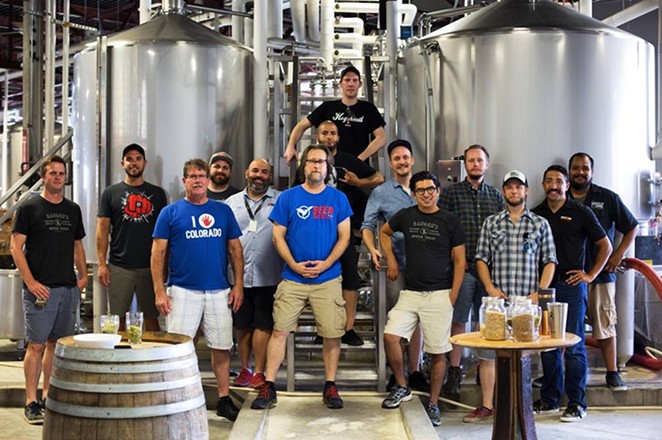 When his aunt passed away after a long battle with a terminal illness, Joe Alvarado decided to ride in her honor. When that decision brought the Busted Sandal Brewing Company co-founder into contact with Colorado’s Left Hand Brewing Company, it sparked a partnership that has now grown into a tri-brewery collaboration to fight one of nature’s cruelest degenerative conditions — multiple sclerosis — one pint at a time.

“I joined the Left Hand MS team last year,” Alvarado told the Current, “and both breweries decided a collab would give us a great opportunity to raise funds for the cause.”

This year, thanks to Freetail owner Scott Metzger’s friendship with Left Hand president Eric Wallace (both serve on the board of directors for the Brewers Association), Freetail joined in too, hosting Busted Sandal brewer Michael Salinas and Left Hand’s head brewer Adam Lawrence (whom the SA brewers introduced to the glories of breakfast of tacos for the occasion) at their South Presa location for the brew day.

Between Left Hand’s venerable milk stout and Busted Sandal’s proclivity for porters, one might expect black hole-levels of heaviness from their collaboration. Wisely, the brewers took the realities of Team Left Hand’s race (the SA-to-New Braunfels “Ride To The River”) into consideration and, as with last year’s On Your Left Hefe ginger-laced hefeweizen, went the refreshing route.

“We always look to have a refreshing, easy-drinking beer during this time of year, and when finishing up a 100 miles on a bike, most people aren’t looking for a Russian imperial stout,” Alvarado said.

“You have to take into consideration the amount of energy exuded during [Ride To The River],” Salinas added. “Ain’t nobody drinking barrel-aged beers on that kind of race.”

Dubbed “Acoustic Motorcycle” in honor of Team Left Hand’s human-horsepowered road bikes, the collaboration is a saison augmented with agave nectar and lime zest. While the standard edition of the beer will see a limited commercial release, Busted Sandal and Freetail both diverted some of the source beer to produce brewery-exclusive variants. These versions be available only at each brewery’s release party, which are spread out across the months leading up to Ride To The River on October 7-8.

Busted Sandal is throwing down at their tap room this Saturday from 5 to 10 p.m. In addition to eats from BJ’s Restaurant and Beacon food truck, attendees will be able to imbibe cucumber, honeydew, and tamarindo-grapefruit editions of Acoustic Motorcycle, the last of which is a cerveceous riff on one of Salinas’ favorite cocktails. Tickets, $20, are available here.

Freetail’s shindig is scheduled for September 9 from 4 to 8 p.m. at their South Presea taproom, where drinkers can try cucumber-jalapeño, pineapple-mango, and dry-hopped cask versions. All proceeds from both events will go directly to the National MS Society. Don’t miss either chance to very literally toast to someone’s health. Tickets are available here.