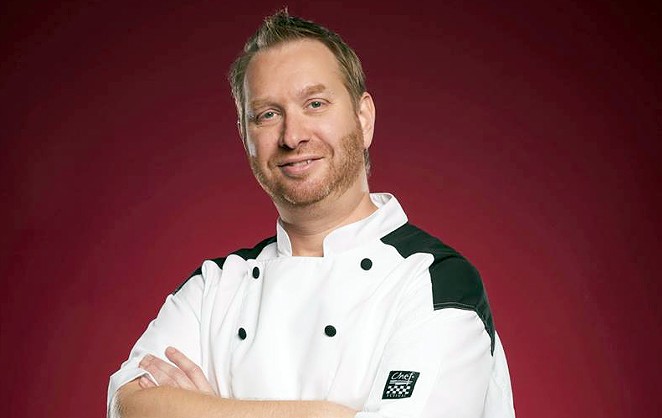 During his first taste of Hell’s Kitchen in 2010, Knack was a Boston-based chef de cuisine. Today, he is the executive chef at San Antonio’s own Fair Oaks Ranch Golf & Country Club.

“I thought if they ever ask me to go back, I would go back in a heartbeat,” Knack told the Current during an interview last week. “I knew it would be a great opportunity.”

In this new season, Knack was ready for an even tougher challenge than his first experience on TV. With a roster of all-star chefs, he knew he would have to bring his A-game to compete.

“I've gotten better as the years have gone by, but so has every other chef,” Knack said. “I'm seven years better than I was seven years ago. The question becomes, “Who is able to uphold [Hell Kitchen’s] standard with every challenge?’”

Knack moved to San Antonio in 2014 to become the Executive Chef at the Omni La Mansion Del Rio & Mokara Hotel and Spa. He was there for almost two years before landing his current position at Fair Oaks Ranch. He said as a newly minted foodie city, San Antonio is rising to the challenge. More importantly, it is very supportive of young talent.

“Dallas and Austin have made their place and Houston is growing,” he said. “But when new chefs come to San Antonio, the chefs already here are extremely helpful. San Antonio is a great place to come and open a restaurant.”

As for working again on Hell’s Kitchen with Chef Gordon Ramsay, whose devilish reputation in the kitchen precedes him, Knack is not worried about stepping into the fire for a second time. He’s known plenty of “challenging chefs” in his career.

“Some chefs like to run their kitchen with an iron fist,” Knack said. “These chefs have expectations. They’re not trying to be difficult or put people down. If a chef is not yelling at you in the kitchen, they've given up on you. Anything the chef says, no matter if they’re talking or whispering or screaming, I want to make sure my ears are wide open.”