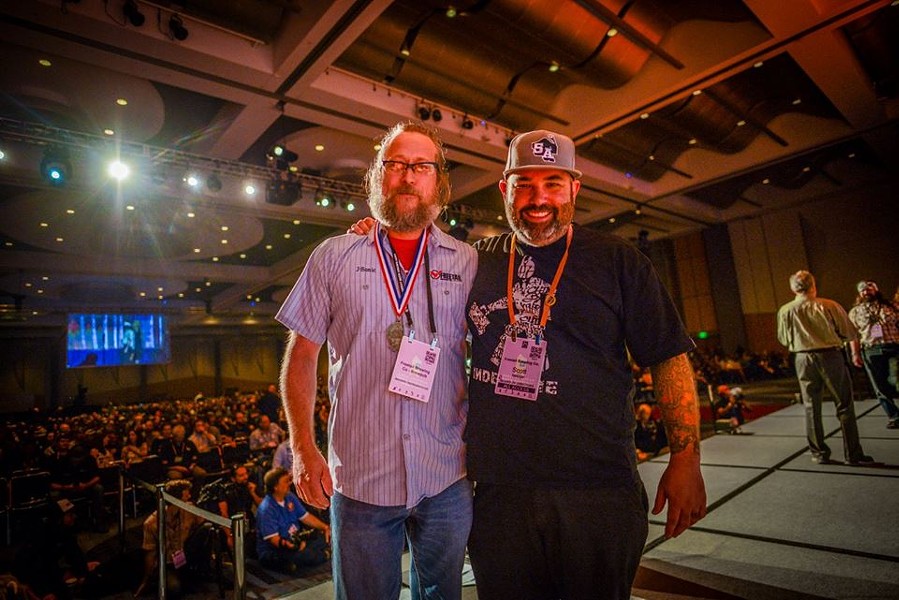 Thousands of brewers waited together in a nondescript auditorium of the Colorado Convention Center for more than two hours as the names of winning breweries were announced. Those lucky winners walked the stage and gave a fist bump to GABF founder Charlie Papazian as they accepted their awards.

This year's competition had 2,217 breweries from all over the United States enter an incredible 7,923 brews, with 276 judges from 13 countries evaluating the best of American ales, lagers, and specialty brews. Many Texas breweries have been recognized for their efforts in past years, and 2017 was no different.

For San Antonio proper, the coup de grâce was a gold medal for Freetail Brewing Company for its 2014 iteration of their Imperial Stout La Muerta, in the Aged Beer category, making it the Alamo City’s first GABF medal. For those not in the know, La Muerta has long been considered Freetail’s signature beer, making its legendary debut back in early 2009 and has maintained a cult-like following ever since with fall releases and special riffs (including tequila barrel aged, raspberry and more).

“I haven’t come down from the high of winning yet,” said Freetail’s head brewer Jason Davis after the win.

Of the Texas winners in the San Antonio area, or at least those available that you can buy right now, Houston’s Saint Arnold Brewing Company, took gold for Pumpkinator in the Pumpkin/Squash beer category; bronze for Amber in the Ordinary or Special Bitter category; and a bronze for Weedwacker in the German-style Wheat Ale category. Saint Arnold also left the competition with Mid-Size Brewery and Brewer of the Year honors.

Though Texas, and often San Antonio in particular, has long been looked at as behind the rest of the country when it comes to small and independent breweries putting out quality craft beer, the Lone Star State has won between 10-15 medals yearly in the last three GABF competitions. After coming in third in the overall medal count this year — behind only Colorado and California — Texas clearly proved that it’s every bit as good as the rest of the country and should now command the respect that we have long deserved.