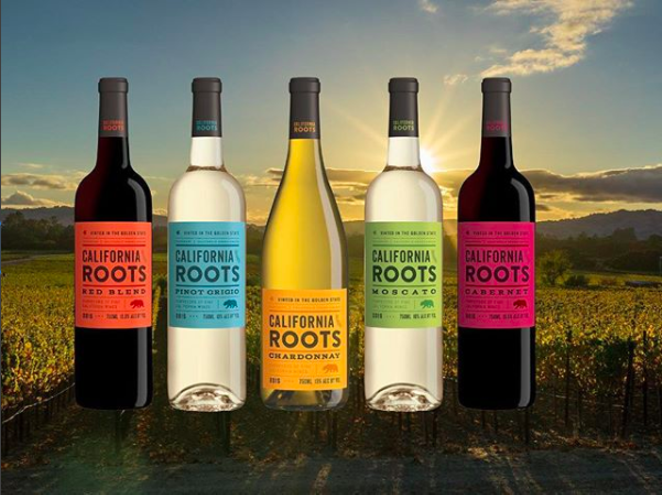 Unique among U.S.-based big-box retailers, Target has enjoyed a reputation as a champion of decent product design, with the whistling teapots, toasters and coffee grinders authored by the late architect/designer Michael Graves likely being the most familiar examples. But unlike at competitor Costco, wine has not been the serious focus of any of Target’s attention — until now. Enter California Roots.

Starting with the simple but graphically effective labels, it’s probably fair to suggest that the five mainstream wines that make up the line (chardonnay, moscato, pinot grigio, cabernet sauvignon and a red blend — all retailing for $5) have been designed as well. But for what audience? Apparently not the whimsical, whistling teapot set.

Pinot Grigio // Enlisting some skeptical co-tasters, I began with pinot grigio, a wine that sees some of its best expressions in northeastern Italy and Oregon where it can be at once zesty and appealingly fruity. The Roots label doesn’t say where in California this 2016 vintage comes from, but it’s fair to suggest that we’re not talking cool and breezy climes. The first whiff was of white flowers, followed by peach and baked apple. More apple emerges on the palate; if we’re trying hard, maybe a little tropical fruit comes along for the ride. But the advertised citrus is nowhere present; the wine is flabby and in desperate need of acid. On a scale of one to five, with five being the highest, let’s say 1 ½.

Moscato // But if the pinot grigio might be redeemed by a more bracing backbone, the moscato couldn’t care less about high-toned concerns such as structure. Aromas are typical of moscato — floral and raisiny. So far, so good. But the palate turns totally honey-sweet and cloying. It’s hard to imagine where this wine might work — maybe in a spritzer with lemon (lots of lemon) and Topo. Or as a frankly syrupy dessert sipper with a slice of pound cake. Score: 1

Chardonnay // Among the white wines, the 2016 chardonnay takes the top prize by virtue of being less offensive than the others. We assume no oak here, not even in the form of chips, as the nose is clean and reasonably bright. On the palate, we get green apple and green melon, and if you let the wine warm some in the glass it rewards (or not, depending on your preference), with some pineapple, mango, maybe a little canned fruit salad in light syrup. Serve it on the cold side, in other words. Score: 2 ½

Red Blend // Red wines made from a blend of grapes have been around for centuries; think classic Bordeaux and its magic melding of cabernet, merlot, cabernet franc, petit verdot and, previously, malbec. Red blends are back in vogue today, but now its no-holds-barred: pinot with zinfandel, merlot with syrah … Roots doesn’t say what makes up their 2015 red blend, but safe to say it’s not classic anything. Sweet cherry and raspberry rise to the top of the glass. The flavors fall into the Jolly Rancher fruit-bomb category. The wine gets a tad less jolly/fruity with some chilling, but the end result is the same: this tastes like cheap wine. Score: 1

Cabernet // Riding reluctantly to the rescue is the California Roots cabernet: it tastes like real wine — maybe even real cab if we’re being generous. Though there’s not a lot of tannin, there is a suggestion of structure; the fruits, while a little plummy/roasty, gain some focus after fridge time; and the notion of an actual finish isn’t totally out of the question. Chill slightly, don’t expect too much, and you’ll be fine at $5. Score: 3