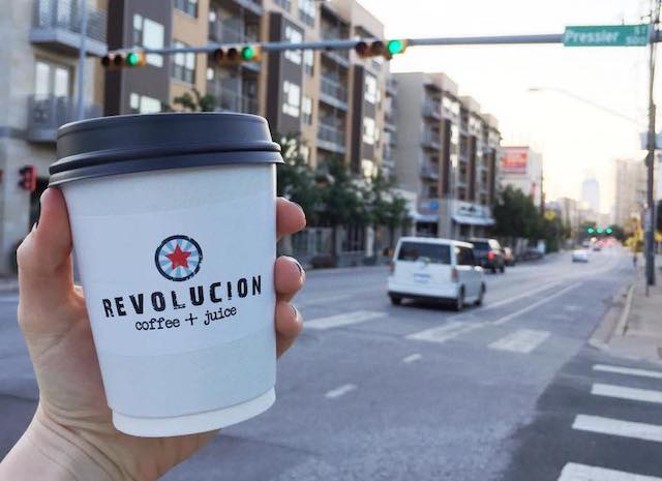 There will be more fast, healthy and fresh food options on Houston Street in the coming months as Revolucion Coffee + Juice opens a second San Antonio location inside the former Moshe's Golden Falafel.

After chef Andrew Weissman vacated that space earlier this summer, owners Manny and Angie Carral "jumped" on the chance to bring their 5-year-old concept to a changing Downtown landscape.

"There's very little we have to do to the back of the house, other than bringing in our products, incorporating our process and making it look like we wanted to look like," said Manny.

Though finding a location Downtown had turned into almost a three year project for the pair, the Carrals, downtown denizen themselves, stuck it out and landed on this 1,500-square-foot space where they'll bring most of the products carried at their flagship store in Alamo Heights. Pitaya and acai bowls, smoothies, along with sandwiches, wraps and to-go meals prepared by chef Michael Hernandez will be available at the new shop. And the aesthetic found at the Broadway location will make its way downtown as well with designer Claire Zinnecker out of Austin tackling the project.

"We've been living down there for the past year so we have a much better idea of what's available and what's not," Manny said. "Items will be fast, convenient. It's not like going to The Palm or Bohanan's, it's fast-casual."

The Carrals are hoping to replicate the process several times over (and a few locations have already been scouted for future Revolucions), and are actively seeking investors. As of now, Revolucion, which opened in 2012 making it San Antonio's first raw cold-pressed juice shop, opened San Antonio Running off St. Mary's in 2015 which carries their juices and nut milks, and franchised a Houston location in 2016.

Revolucion's downtown location is expected to open in early 2018.