Where to Sip on a Winter Cocktail in San Antonio

With the colder weather here, creamy heartwarming cocktails are becoming increasingly popular. Bars all around San Antonio have added a cocktail of this nature to their menu, all with different ingredients and unique takes.

Blue Box, in the Pearl, is serving a minty variation on the cream cocktail, with a bit of a savory twist. The Kobayashi Dreams available on the bar’s winter menu is a combination of Tito’s Vodka, Stillhouse Mint Chip Moonshine, rosemary simple, and cream. The rosemary adds a nice light aromatic note to the finish of the drink that is reminiscent of melted mint chocolate chip ice cream.

Still craving mint? Head on over to Jazz, TX for the First Fig Swig. This drink is a creative combination of vodka, cream, an amaretto-honey-fig jam, and mint. If the rosemary in the Kobayashi Dreams wasn’t quite savory enough, this one is sure to please. More similar to an Italian cream soda, the drink is a balance between refreshing mint and flavorful jam.

Next up is Brooklynite’s adventurous Cereal Milk Punch Vellocet, a combination of brandy, a Golden Graham infused three-milk mixture, mescal and Chartreuse. Omar Cormier, the mind behind the Clockwork Orange-inspired milk punch, wanted to create a cocktail that not only embodied the movie, but was a take on the overly sweet drink most bars produce. The Chartreuse and the mescal in the cocktail enhance the variety of flavors that are in the drink. It’s not just a creamy cinnamon flavor that is showcased, the herbal notes in the Charteuse really come forward and almost make you forget that you are sipping on a milk-based cocktail.

Want to sip on these winter based concoctions while reminiscing over the summer? Hoppy Monk’s Horchata Con Ginebra is a perfect balance between the flavors in the popular winter drink with added floral notes to remind one of the summer months. The drink is a combination of Old Tom gin, house-made horchata, honey and cinnamon syrup, lime, herbal bitters. The house-made horchata is light and not cream heavy, but it adds the slight creamy sweetness and cinnamon notes to the drink which is then balanced out by the gin, lime, and herbal bitters. This drink is sure to satisfy during those warmer winter days common to San Antonio. 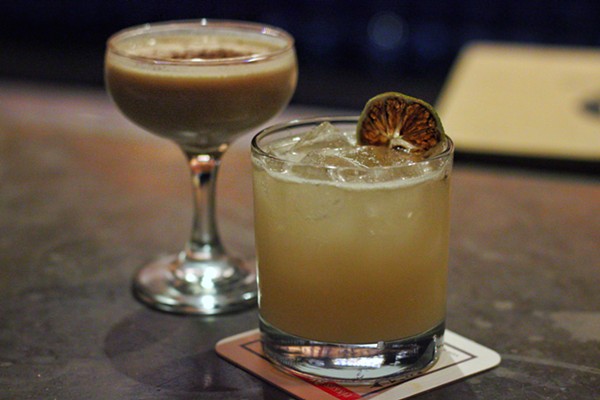 In addition to the horchata cocktail, Hoppy Monk has been serving one of the creamier side as well. As participants in the Brandy Alexander tour sponsored by Dorcol Distilling Co. they created a Brandy Alexander featuring Kinsman Rakia Apricot Liquer, cream, China China, St. Brendans, and Merit Coffee Liquer. It's a nice contrast to the lighter cocktail on the winter menu.

For fans of the Brandy Alexander, it can be ordered at participating cocktail bars around San Antonio (like Hoppy Monk and Brooklynite) or can be made at home. Just pick up Kinsman Rakia and creme de cocoa during the next trip to the liquor store. The original Brandy Alexander recipe is a simple combination of 1 or 2 ounces of Brandy (use Kinsman to support SA), 1 ounce of Dark Crème De Cocoa, and 1 ounce of cream, shaken and garnished with grated nutmeg. Perfect for indulging in when  watching a favorite holiday movie.