Homing In On the Range: Modern Chophouse Basics, the Dady Way 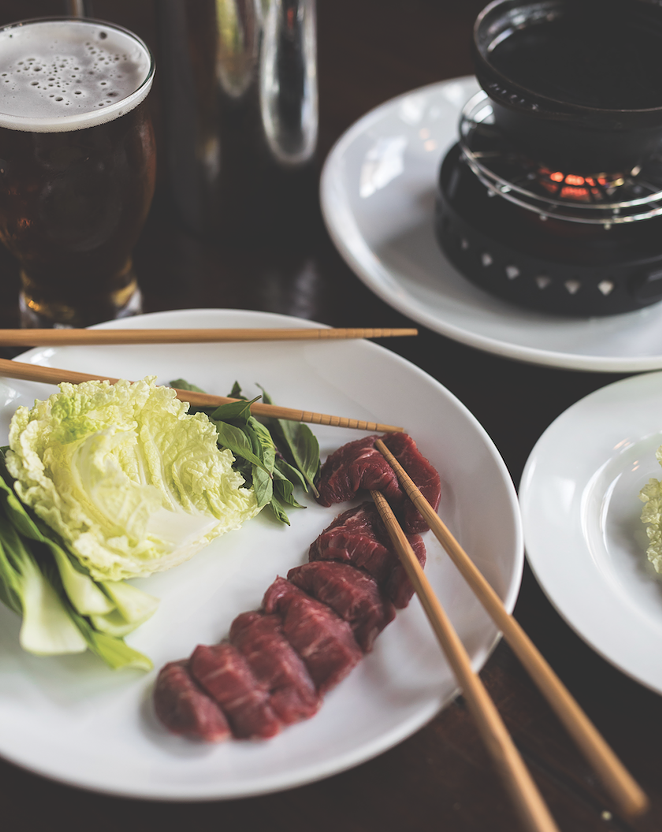 Jason Dady and group didn’t change much in their transformation of the former Luke into steak-centric Range (FYI, there are now four high-end steak houses within a three-block span of East Houston alone — just saying): the bar, for example, retains not only its punishingly uncomfortable top but even keeps the same, rattan-like barstools. Some wallpaper has been added, a little deep blue paint has been applied, and there’s some new, home-on-the-range appropriate art. As there’s nothing that could be done about the intrusive elevator shaft and the dining space’s effective ignoring of the river, what you had before is essentially what you still get. At least architecturally.

The menu is, of course, another story. To be sure, there are steaks — but only four of them: a dry-aged New York strip, a sirloin “culotte” (the cap muscle of a top sirloin), a tenderloin filet, and an 18-ounce ribeye. Grilled Korean short ribs, pan-roasted chicken, Texas quail, bacon-wrapped pork tenderloin, and four seafood dishes, including a luxurious-sounding (and priced) lobster pot pie, round out the mains. Creamed spinach rears its knee-jerk, steak house head in the sides column.

But you’d never find a Wagyu beef hot pot on the appetizer list of a traditional steak house. And there are also the likes of pan-seared gnocchi and smoked gouda cauliflower gratin among the family-sized sides. Then there is the already somewhat notorious, tableside Caesar salad.

Early stories had service coming to a screeching halt while staff tried to deal with multiple orders of the famous dish. But as currently tossed by sommelier/Caesar steward John Roussin, formerly of Il Sogno and High Street Wine Bar, the process is smooth — it was his 16th of the night, he confided. In a departure from tradition, Range uses Little Gem lettuce instead of romaine. This isn’t necessarily heresy, though chopping the compact head results in a less pretty presentation. The meticulously made dressing employs the traditional egg and anchovy, offbeat kewpie Japanese mayo, and, specifically mentioned, EVOO from the annoyingly ubiquitous Rachael Ray. The result of all this is a mountainous serving, more than enough for two, in which the dressing, for all the care put into its preparation, lacks snap, and the croutons emerge as a star ingredient. Sea salt was requested.

If additional salt seemed necessary in the salad, less of it might have been appreciated in the tender orzo (a seed-shaped pasta) with grated cacio cheese and pepe—the bowl seemed to swing between salty and cheesy, always with the strong back beat of black pepper. Still, we appreciated its cheek. But we absolutely loved the crispy fried Brussels sprouts with mellow blood orange gastrique. Bring ‘em on in even greater quantities. 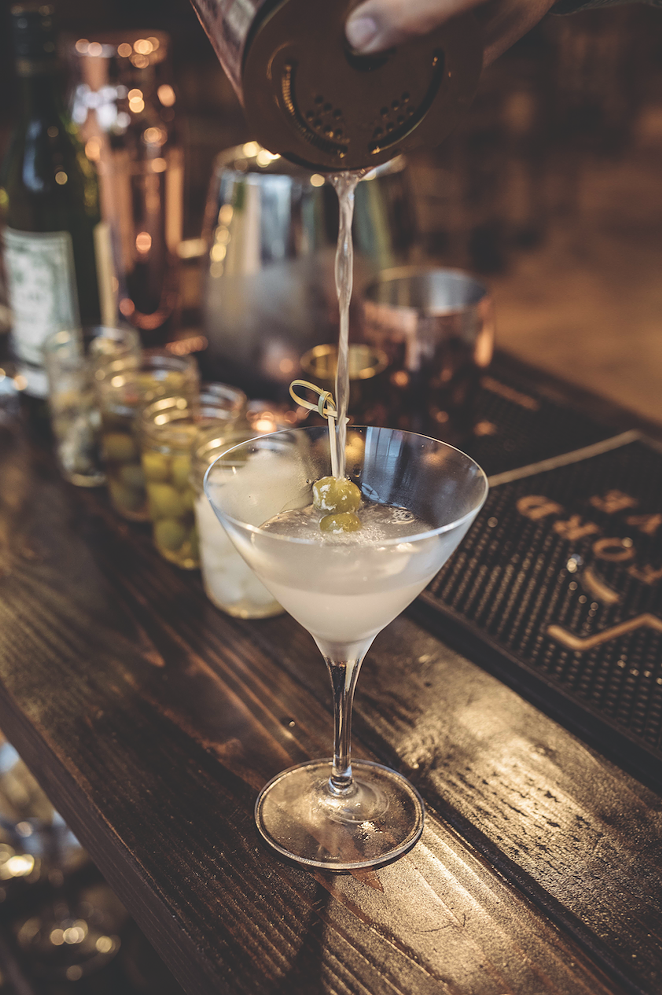 Service started out slow for a weekday night, but picked up the pace after the arrival of the black pepper meatballs with parmesan, tomato jam, burrata and rapini pesto. If that sounds like a lot of ingredients it’s because one or two (the cold tomato jam, for example), might easily have been omitted — especially if that meant paying more attention to the meatballs themselves: tasty as they were, they arrived dry and overcooked. There was no complaining whatsoever about the degree of doneness of the two mains.

Because staff couldn’t come up with a convincing, agreed-upon definition or provenance (we know practically down to the zip code where the beef comes from), let’s first discuss King Ora salmon. King Ora? Turns out it’s farm-raised in New Zealand, and it further surprises in that Ora is on Monterey Bay Aquarium’s good-guy list — even above some wild options. Bland taste is another usual reason for avoiding farmed, but not in this case. Though utterly naked and alone on a large (but handsome) plate, the roasted, cross-cut fillet was resplendently salmon-colored and robustly flavored down to its nearly rare center. A slathering in optional-extra, uni-flavored butter only amplified the flavor.

We had actually ordered the butter for the strip steak — just in case, but no additional flavor enhancement was required. (Save the pricy foie gras with pickled blueberry topper for the dutiful tenderloin.) Some adjustment was nevertheless necessary, and it has to do with the joys of sharing. In an ideal world, all of a critic’s dining companions would, for example, prefer steak no more than medium rare. But in the real world, there are many qualities more important than degree-of-doneness compatibility. As a necessary part of this discussion, our attentive waiter took matters into his own hands and had the kitchen split the steak before grilling. Compromise avoided. My portion, a perfect medium-rare, got most of the fat, but the rest was so good I’m not complaining. No, really.

Joining creamed spinach in the steak house standards department, the dessert menu does have the obligatory cheesecake — albeit white chocolate in this case. Alas, we may have avoided it at our peril. Sharing again, we picked the slightly iconoclastic Mississippi Mud Pie and found it not at all pie-like. More like a cold mess of crunchy parts that should have been cakey, mousse-like parts that might have been denser, Nutella that got lost … sorry, I didn’t understand this one. But then dessert is rarely needed at a steak house anyway —even an inventive, Dady-tweaked take.