Tea-like and Rare, San Antonians Can Now Splurge on This Pricy Coffee Varietal

The world of craft coffee is expansive and always evolving, so as San Antonio continues to get its feet wet in the coffee landscape with new shops popping up all the time and roasters continuing to refine and expand their offerings, the city is lucky to have passionate people leading the charge and acting as pioneers and educators.

Jamie Isetts is one of these people. Isetts is coming up on three years as Director of Green Coffee at Merit Coffee, the umbrella roaster for Local Coffee, a favorite SA shop now boasting six locations. And Merit is better because of Isetts. One of her more recent, successful projects was introducing the Geisha varietal to Local Coffee customers. Isetts talks about coffee and her role with such passion, it’s easy to see why she’s the perfect person for the job. We got to chat with Isetts about their latest offering — the Geisha varietal — why it’s being served at Local Coffee, what makes it unique, and why it’s pricier than other menu items.

Robby Grubbs, owner and roaster, has always tried to stay in tune with his customers so that they are having the best experience possible when they walk into one of his shops, whether that’s just enjoying a cup of coffee, or geeking out about it. The rare Geisha varietal isn’t for everyone, and that’s ok. Regardless, Isetts and Grubbs are passionate about introducing Local customers to and educating them about high quality beans.

Bringing the Geisha varietal to San Antonio, courtesy of Isetts, aligns with Grubbs’ vision to work with growers who are constantly striving to develop the best coffee and push the limits of traditional growing methods. What makes the Geisha varietal so rare is that it is incredibly hard to grow, and because the farmers are trying to produce the best possible product, many of the beans are weeded out early on so that only the best make it to the final stage. The special care given to the Geisha varietal doesn’t stop on the farm. Merit’s Lead Roaster, Joe Garlitz, worked with a much smaller batch size and tested the profile out quite a few times. The team also did a test batch of each of the three coffees and got feedback from other roasters they respected before making the major changes that appear in the final product. 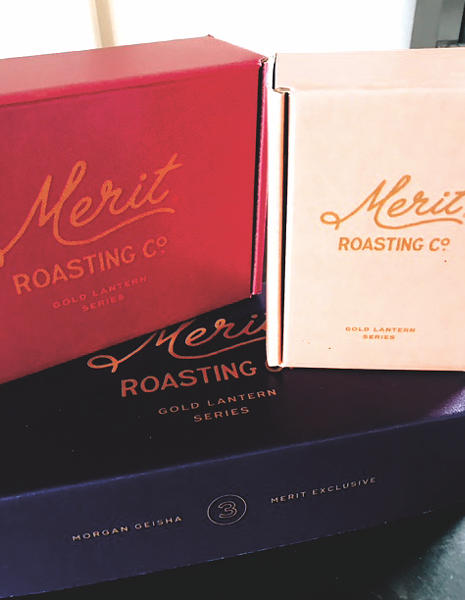 Geisha is a very rare varietal that is typically only available in competitions and sold at auctions  — sometimes even topping out at $110 per pound. The varietal originates in Ethiopia, but was smuggled into Panama in the early 1960s, which according to Isetts, is where you’ll now find some of the best in the world as the climate in this South American country is very well-suited for it. The team at Local like to call it “coffee dialed up to 11.”

Isetts first learned about The Morgan estate, an award-winning farm in Panama, from another grower in Brazil who suggested she meet Jamison Savage. Savage’s Geisha varietal is the winner of several Barista Championships, often landing in 1st or 2nd place, and has scored in the 90s out of 100 on the SCA cupping sheet, which is the industry’s scoring system. Most beans score in the mid-80s. It’s no doubt Savage is producing some of the highest quality coffee in the world, and it has made its way to Local Coffee’s shelves.

“What sets this project apart isn’t the Geisha varietal itself, but the interesting approach of the farm. These guys are really doing something different and challenging themselves to be teachable, which is one of our core values. Those are the type of people we want to work with,” said Isetts.

The coffee has a distinct floral flavor and a juicy acidity that doesn’t get in the way of its smooth finish. It could be compared to some Ethiopian beans, but this brew truly does stand out.

A 12-ounce cup will put you out $10 for the washed brew, meaning the fruit and skin are removed from the bean before the drying process. Though no longer available, Local also offered two other processes for the varietal including a $11 pour of the natural brew, meaning fruit and skin are left on during drying; and $15 for the carbonic maceration, which is the longest fermentation process and provides the most complex flavor.

“I actually tasted these coffees on a table with other Geishas from a farm in Mexico. I didn’t know which were which, but Jamison’s jumped off the table in comparison to the others. The clarity of flavor was something that really stood out to me. Jamison is always open to feedback and dialogue, which is important when dealing with such a small quantity of coffee. We decided together when the best time of year would be to serve the coffees and talked about how he would like to see them presented,” shared Isetts.

The reception at the San Antonio locations has been very positive. Both the staff and customers have been excited to learn about and try this exquisite brew. Whether you’re just wanting to enjoy a great cup of coffee or you want to geek out about this unique varietal, the higher price point comes with a friendly and educated staff who is ready to explain the particulars.