Will Pollos Asados Los Norteños Measure Up to Itself When It Reopens?

There are two types of people in the world: those who know the magic of Pollos Asados Los Norteños' spatchcocked grilled chicken and those who didn’t make it to the restaurant before the Texas Commission on Environmental Quality filed a lawsuit against the Rigsby outpost for violating the Texas Clean Air Act this past September.

First launched as a truck, and later an ice house-turned-restaurant in early 2010, Pollos Asados Los Norteños or “Pollos” as it's widely known has built a solid following of San Antonians, chefs, local food writers and in 2016, even the BBQ Snob himself, Daniel Vaughn, expounded on the restaurant’s merit, saying "'It’s great grilled chicken, but is it barbecue?' I pondered this as I cleaned the meat off of a wing bone.”

For the uninitiated, Pollos is an experience. There’s the matter of finding parking in the packed lot, and squeezing past the crowd of souls both dining in and taking orders to just to get your name on the list. And then you wait — with any luck you’ll score a seat at one of the metal benches that line the waiting area — all the while staring at pit workers through a smoke-stained window. Wait times crept up as Pollos' popularity grew, but once inside, the servers were always attentive, friendly and best of all, fast. One of the 750 or 800 pollos made daily, either entero or medio, would hit your table, along with plastic plates and cutlery, a foil-wrapped onion, Spanish rice, some of the best charro beans inside 1604 and a creamy tomatillo sauce that really should be served by the pitcher.

As Vaughn pointed out in his write-up, the smoke served as a beacon for delicious pollos to come. But unlike the uproar Franklin Barbecue faced when Austin City Council considered rules that would “require barbecue smokers (and other wood-fired cooking devices) be placed at least 100 feet from adjacent residential property lines, or that they ‘mitigate the impact of smoke emissions’ on their neighbors," Pollos is fighting to stay open on its own.

The city intervened in 2016 — shutting down Los Norteños for three weeks until smoke scrubbers were added — and after the State's lawsuit, Pollos' owner Frank Garcia is still trying to make things work. A larger pit is being built with a new smoke-scrubbing system, and pollos will soon be on their way.
Much like Jaliscos dot San Antonio neighborhoods, restaurants and trucks hawking pollos asados have popped up in the last several years. Each delivers a half or whole chicken, beans, rice, tortillas, and green sauce. 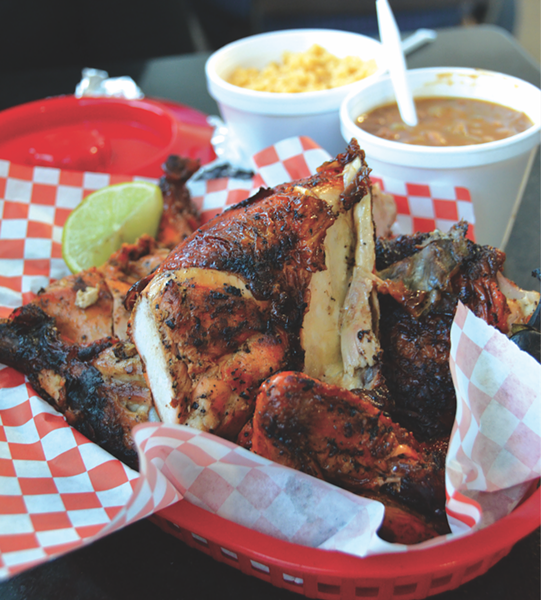 With pollos reaching an absurd level of fandom, I scoured the city for comparable deals. Pollos Asados Los Carboneros on General McMullen has been serving pollos out of a brick-and-mortar for more than a year now, though they had similar trailer beginnings. Service was friendly, and the tortillas were clearly coming from a nearby producer, but the green sauce was too runny and the chicken was a hair away from dry. At Pollos Regios, an outpost off Fredericksburg Road, the beans were garlicky but lacked personality. The sauce was one of the creamiest around, and the chicken came close, but was again too dry.

Super Pollos Asados on Walzem had a growing line of cars in its drive-thru and familias crowded the wee shop (there’s one table available indoors) in their Sunday best. Pollos Asados Los Primos on Culebra Road distracted us with too many menu options, and the pollo lacked that signature reddish marinade from Los Norteños.

Hope was served with a side of chicken at Pollos Asados Don Jose, a trailer off South Flores near a Culebra Meat Market. Quality tortillas, a delicate smoke, a red-tinged fowl, and a creamy green sauce that had some bite, made the trek and the cash-only service worth it.

There is still more to explore. Taqueria El Novillero on Nacogdoches and Pollos Asados El Coliman on the far Southside popped up on our radar after our research.

Maybe the obsessive fandom is warranted, and there’s a reason why the lauded salsa and inexpensive pollos were grilled by the hundreds. Maybe Pollos Asados Los Norteños will even taste better when doors open in the coming weeks. There’s only one way to find out.