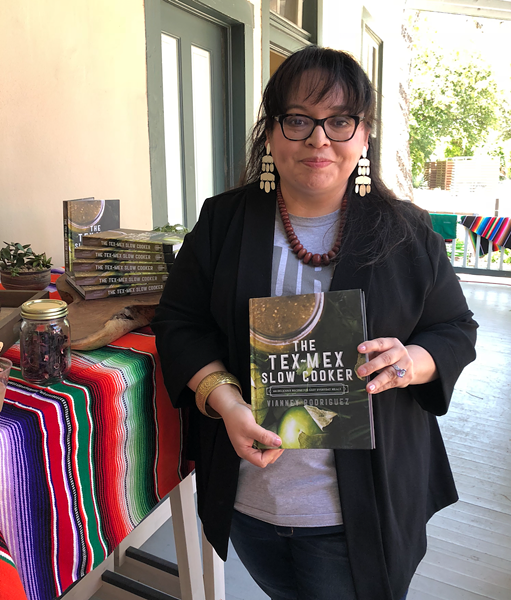 The wife, mother of two and award-winning blogger, who is currently promoting the release of said book, says the yearlong process was arduous. Translating recipes from the stovetop or grill to the slow cooker, and testing each recipe at least three times (six for the carne guisada), isn’t for the faint of heart.

And though NBC’s This Is Us would have you believe that slow cookers are dangerous, they're not. And for Rodriguez, her slow cooker could and should catapult her and Tex-Mex cuisine into the spotlight.

But getting to the sleek new hardcover emblazoned with tomatillos also meant skipping two rounds of edits due to Hurricane Harvey. As the Category 4 hurricane barreled to shore this past August, Rodriguez and her family, along with their pair of 80-pound pit bulls, evacuated their four-bedroom home in Aransas Pass for the safety of Driscoll inside a two-bedroom home Rodriguez was converting into a workspace.

“I was in the process of turning that into a sweet life studio where I could shoot my pictures and do all my cooking and leave all the props there,” Rodriguez said.

When the storm passed, Rodriguez and Co. ventured back to Aransas Pass a week and a half later to take stock of the damage.

“The city had already marked it unlivable … the roof over my daughter’s room had collapsed,” Rodriguez said. “We went into the backyard, and it was like all my trees were asleep. They were pulled from the root."

Her editor shipped a hardcopy of the book to Rodriguez in Driscoll, where she still had no Internet, and the book was completed after her edits were made.
“It was the last beautiful thing I created in my home,” Rodriguez said during her San Antonio book launch.

It’s easy to see why The Tex-Mex Slow Cooker: 100 Delicious Recipes for Easy Everyday Meals took a toll on its author. Photos are impeccably staged, and recipes share a bit of history from Rodriguez’s family, and that of most of South Texas.

Not everything was transformed as Tex-pats might remember. Instead of chiles rellenos, Rodriguez turned the dish into a casserole. But the basics are there.

The recipes are easy to follow and ingredients can be sourced at most Mexican or Latin American shops in the cities she’ll tour this spring. But she notes where to look online for ingredients that won’t be easily found in stores otherwise, such as hibiscus or guava.

Chapters are broken down into appetizers, main courses, salsas and sides, desserts (created in part with daughter Angelica Maria, who will attend the Culinary Institute of America-San Antonio in the fall), and, of course, beverages and cocktails.

What The Tex-Mex Slow Cooker does well is introduce ingredients and methods for a maligned cuisine that isn’t always smothered in cheese. Her recipe for lengua (beef tongue) makes the otherwise icky offal accessible. And the Mexican chocolate pan dulce bread pudding helps add a twist to conchas.

Though the book is relatively easy to follow, she does note patience as the key ingredient in one specific section: rice.

“People get antsy and pick up the lid and let out the heat it needs to cook-through,” Rodriguez said.

Note: Piloncillo, or panela, is an unrefined Mexican sugar that can be found in Latin markets. It’s sold in cones, blocks, or round discs; I suggest using a box grater to grate piloncillo.

Add a second layer of the remaining concha cubes and add the remaining almonds and raisins. Top with the remaining milk mixture and then press down on the cubes with the back of a spoon, ensuring the cubes are fully submerged. Cover and cook for low for 4 hours, or until all of the milk is absorbed and the center is set.