West Side Will Be Home to San Antonio's Newest Caribbean Restaurant

Lattoia Massey misses the proximity to water, but that desire to recapture the magic of island life has driven her and husband Cornelius to open her own Caribbean restaurant in the city's West Side.

The couple's story started in 2010 when they met while deployed in Iraq. After ending up in Hawaii, the now-veteran Lattoia decided to follow her passion for the culinary arts and apply to the Culinary Institute of America-San Antonio.

"I had to convince him to leave Hawaii," she says.

After graduating from the San Antonio campus, the Masseys dabbled in catering and meal-prep food service, but eventually the itch to open their own shop struck. Though based in Boerne, the pair looked for a spot around the city's core to open The Jerk Shack, a nod to the jerk spots found throughout Jamaica, where Lattoia is from. 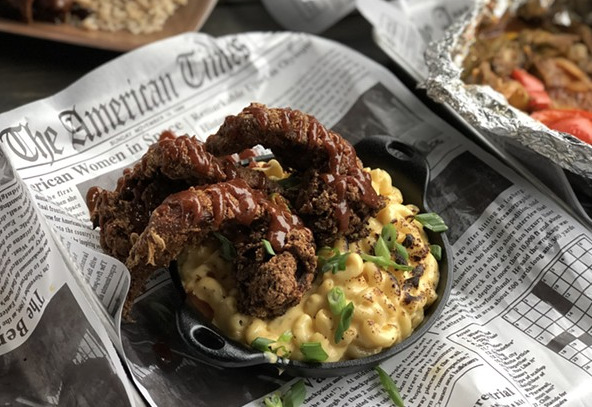 The Masseys, alongside sous chef Imani Peterson, make all the items from scratch, including a jerk barbecue sauce (used for the jerk wings), an OG jerk Irie sauce, and a mild "Sweet Ting" sauce.

Billed as "San Antonio's first artisan Caribbean restaurant," The Jerk Shack is a quaint and polished open-air restaurant similar to Dignowity Meats. The menu will feature meats by the pound, starters, Chef's Specials, and sides. Chicken and pork by the pound will range between $7 and $13; starters will run $3 to $8; entrees, like the jerk tacos, jerk shrimp and grits with maque choux, jerk wings and mac, steamed fish, braised oxtails and curry goat will range from $8 to $23; vegan options will feature jerk jackfruit with rice and peas and coconut curry vegetables.

The shack will be BYOB (it neighbors a KIPP Academy campus), but Jamaican sodas and set up mixers will be available for purchase.

The grand opening will take place May 11 from 6 to 10 p.m. with live music, swag and samples.