Despite Opening During a Recession, Pasha Mediterranean Grill Has Grown Into a Mini Empire 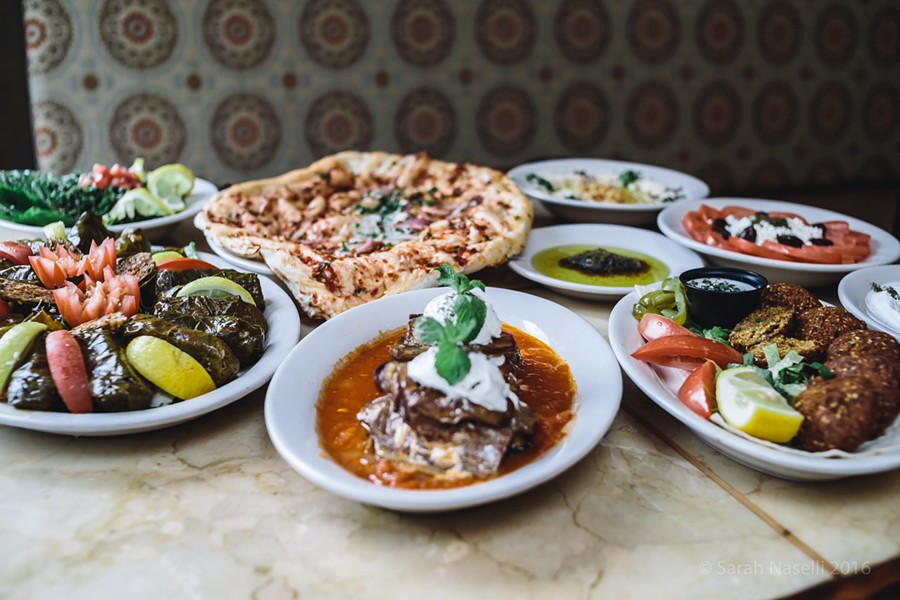 It’s lunchtime. The chicken schwarma glistens on its spit next to the gyro and its beef counterpart. Fresh and pliable naan bread leaves the open kitchen in a stream of unleavened goodness, ready to bathe in a puddle of olive oil and za’atar, a blend of thyme, oregano and sesame seeds. And hungry San Antonians stream into Pasha Mediterranean Grill for another taste of creamy hummus and that naan, much like they have for the past 10 years.

Big things have small beginnings, especially for Pasha and the restaurant group behind it. Their Wurzbach location now goes through 70 50-pound bags of flour for naan a week. Back in 2008, when founders Daniel Deiri and Kamran Hajivandi teamed up to open the restaurant inside a former Sombrero Rosa (hence the distinctive façade), the only diners familiar with the fare were members of the military.

“It was hard to visualize things, and that slowed things down when you had someone at the register for 10 minutes asking questions and trying to understand,” said Bill Deiri, Daniel’s son who’s been entrenched in the restaurant’s day-to-day operations from the beginning.

Pasha eventually switched to sit-down service with servers who could explain new menu items to curious diners. And San Antonio loved it.

The eldest Deiri handles real estate and construction while Hajivandi and Bill handle the day-to-day hurdles. For Hajivandi, who hails from Iran, the first three years in business were the hardest of his life.

“We were working seven days straight, living day by day, trying to catch up with the business,” Hajivandi said.

That included overnight aesthetic changes to the restaurant to accommodate more customers so as to not interrupt business.

While the first three years may have been a blur for Hajivandi, the restaurant’s success spurred growth. Naara Café was added to the mix, with Majid Nehrafza handling operations for the hookah lounge. A second location, this time off Blanco and 1604 followed in 2010, and another opened off I-35 and Selma in 2014.

No, Pasha wasn’t the first Mediterranean restaurant in San Antonio by any means. Demo’s opened in 1979 with Greek favorites; Papouli’s Greek Grill followed, as did Jerusalem Grill, which will add a third location in Stone Oak this year. But Hajivandi credits their unique mix of cuisines — the menu combines Mediterranean, Persian, Greek, Syrian and Arabic bites — for part of the appeal.

“We didn’t want to limit ourselves,” Hajivandi said.

Bill’s guess about the success of the restaurant is that it found its niche early on: serving big portions, priced well for its freshness.

Introducing tasty versions of new-to-SA dishes also helped. There was that unleavened bread that Bill jokes is a good replacement for chips and salsa. There’s the koobideh ground beef kebab that’s now one of the top-selling plates. There’s the chicken sheesh tawook marinated in garlic, olive oil and herb that’s also a favorite.

Paying attention to the smallest details paid off. The restaurant switched from canned chickpeas to boiling their own in-house soon after opening.

“It’s a lot cheaper to do it from scratch, too,” Bill said.

Not content with ordering small cakes from food purveyors, the owners sought out bakers to take on the task of making fresh baklava for the restaurants. They found brothers Yousef and Mahmoud Othman, who specialize in Mediterranean and European desserts, respectively, and the concept for Baklovah Bakery was born.

“We were buying from U.S. Foods or Sysco, and the desserts weren’t bad, but it didn’t fit with what we do having our own recipes.”

At Baklovah, which sits across the way from the original Pasha and next to Naara, those with a sweet tooth can order delicate baklava in several varieties or Turkish candies and chocolates by the pound. Everything is made in-house by the Othman brothers, down to the eye-catching macarons and almost-too-pretty-to eat mousses and cheesecakes.

“If people have questions or they haven’t heard of this, we just let them sample,” Hajivandi said. “It’s better that way.”

Last fall, Pasha dipped their toe into the fast-casual realm with the opening of Pasha Express. Lunchtime visits at the sit-down location take no more than an hour — they know their customers. Helmed by Nathaniel Costa, a childhood friend of Bill, Pasha Express added fresh local options to the University of the Incarnate Word campus. There, the owners learned new systems that allow for a smaller location and smaller staff, as well as adding new items such as spicy biryani rice and a homemade barbecue sauce. The location, which is open to the public, is closed now for the summer.

That “break” gives the group time to work on several other projects such as the opening of a second Pasha Express, this time at Culebra and 1604.

“There was a lot of opportunity, and we took everything on and now we’re just trying to catch up,” Bill said.

The new Pasha Express is 2,000 square feet of fast-casual Mediterranean fare, with enough seating for 40, plus more on the patio. There are seven plates to choose from or customers can build their own salad/bowl/wrap, which uses the signature naan bread. At the end of the cafeteria-style line? A display case filled with single servings of hummus, dolmas and desserts from Baklovah.

San Antonio will likely see more of these in years to come. It’s easier to train a smaller staff and the menu isn’t as daunting as the sit-down restaurants’.

There’s also the food truck that hit the road a week after Pasha Express 2.0 opened. Then there’s the grilled chicken concept in the works inside the former Arby’s that neighbors the original Pasha where Bill said they’re adding a custom oven that fits 40 birds.

There’s also another Baklovah on the way as the Pasha restaurant group moves close to the city’s core. They’ll join chef Johnny Hernandez at Big Tex Flats later this fall.

The growth is also made possible by grooming their staff to take on management roles.

Brazil-born Douglas Sanchez has been with Pasha since 2010 when he jumped on board as a dishwasher. Now the general manager at the Wurzbach location, Sanchez prepares for three different rushes: lunchtime, dinnertime, and post-sundown dinnertime for Muslims observing Ramadan, a month of fasting.

There’s also Mustafa Samim, a newly appointed operations manager, who found Pasha after moving to San Antonio in 2014. He joined as a server and eventually managed the Selma location before moving over to Pasha Express to help train staff.

At 30, Bill divides his time between new openings and troubleshooting across town. The UTSA grad briefly worked on earning an MBA, but he shelved those studies for restaurant life.

“This is a very demanding business, and it’s hard to do both at the same time,” Deiri said. “I was focused on making this something big and special, and I didn’t want to pass up an opportunity like that. I feel like you’re given so many opportunities in life and if you don’t take it, you might not get another one.”

Ten years in, it seems to have paid off.