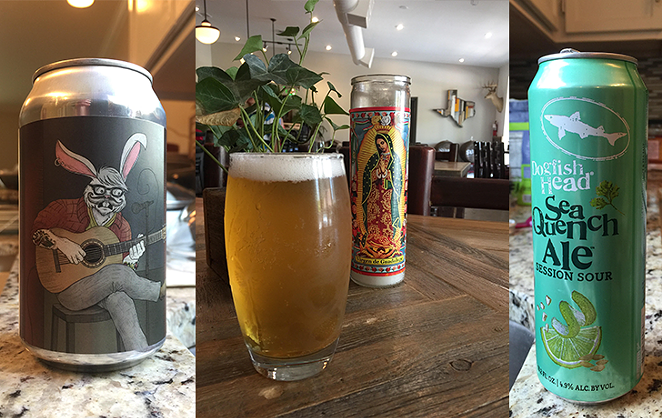 109. Not the number of taps at the Flying Saucer. One Hundred and Nine. Not the IBU for a new IPA. CIX. Not the bottle count for your favorite barrel-aged seasonal release. It’s San Antonio’s record high temperature for July 23 earlier this week, aka Too Much Of Heat For Anyone Living, essentially, in essence, TOO DAMN HOT.

Who can drink beer at a time like this, when you can fry eggs on the sidewalk and bake Tollhouse cookies on your dashboard? You can, daring reader. I know you can. It just might be in your best interest save the stouts for a day with merely double-digit temperatures, and so we’ve gathered up a clutch of light-bodied but still-tasty brews to sustain you in the meantime.

5 Stones Spring Pale Ale
As we said about this time last summer, the battle against the heat is largely psychic. That’s why we recommend starting with a beer that brings to mind more temperate climes, like the Spring Pale Ale from 5 Stones Artisan Brewing. It drinks pillowy as a cumulus cloud, with a wildflower romp of foraged flora — elderflower and heather tips, in this case — applying a cold compress to your metaphysical forehead. SPA is also dry-hopped with Cascade and Mosaic hops, but they’re playing tambourine here, not lead guitar, and so this pint finishes dry with a refreshing uplift — an reminder that it will not always be summer.

Real Ale Hans’ Pils
A faithful companion and trusty sidekick during the dog days of summer, Real Ale’s Hans’ Pils is the ur-Texas hot weather craftie. Sleek as a BMW with none of the entitlement, this German pilsner cools you down without demanding too many calories or denying any flavor. The peppery yeast and assertive hop profile lends just enough tongue-tingle to set this puppy ahead of the pack. Plus, if you’ve blown your alcohol allowance by face-hugging the air conditioner, cases of HP have been known to pop up on sale for about $1.25 a can. Maybe Real Ale will run a $1.09 sale to ease our suffering. It doesn’t hurt to dream.

Dogfish Head Sea Quench Session Sour
You lose a lot of sodium when you sweat all day. For this you should drink the Dogfish Head SeaQuench Session Sour. Sold as tall boys in a striking seafoam green, SeaQuench blends gose, kolsch, and Berliner weisse beers into a single dehydration-fighting crusher. DHB threw green and black limes and straight lime juice into the pot along with sea salt harvested from the Maine coast; they also chose grains high in potassium to help stave off cramps.The outcome is juicy and salty,with an insouciant smidge of coconut. Salty key lime pie beverage? Your move, Powerade.

Independence Redbud with Cucumber Berliner Weisse
Austin’s Independence Brewing rolled the dice on an unorthodox adjunct to their Berliner weisse a few summers ago, and thank goodness they did. Rather than producing spiked Vlasic juice, Independence cans a beer recalling the lemony kiss of fattoush salad. Very effervescent, sour but not too tart, Redbud drinks light like wheat beers do, while cukes temper the scotch-taped-soggy-fruit-on-the-roof-of-the-mouth (surely there is a German coinage for this) quality that can plague lesser Berliners. Indeed, the vegetal dimensions to the Redbud would go down well with some Doner kebab — once it’s just a little less heiss.

Künstler Brewing King Willy Kolsch
One cannot live on liquid bread alone, even during a heat wave, and so we suggest dropping into Künstler for a true Teutonic classic combo. There, you can quaff a pint of the King Willy Kolsch: golden-hued, mellow-bodied, politely malty with a zippy little yeast profile, it’s the ideal foil to a soft pretzel and some cool mustard. We must lean on familiar comforts in trying times, so tear a bite, take a sip, and daydream about Oktoberfest. It’ll be here before you know it.