The drive north up 281 is getting more depressing by the day as hillsides are razed and scraped for a wholesale carpeting of identical dwellings. The situation improves, at least for now, the closer one gets to Blanco. We’re turning east on 163/165 just short of town; it’s the shortest route to Dripping Springs, and the journey from this point on has as much appeal as the destination.Stretched out along 290, and perilously close to an avariciously expanding Austin, Dripping Springs lacks the immediate charm of small Texas towns that have escaped the pressure of adjacent cities. But as you enter from the west, signs of roadside sprawl are still few; it was here that we stumbled upon Crêpe Crazy (660B W. Hwy 90, crepecrazy.com). CC is staffed entirely by deaf personnel who communicate in American Sign Language: Service may be silent, and you point to your choice on a menu, but it’s altogether professional. And if you order judiciously (peanut butter, banana and caramel — what was I thinking?), the crêpes will also please.

The eastern side of the town, with its chains and commercial centers, betrays more the influence of its omnipotent neighbor, and it was here that we elected to check out newly minted The Switch (166 Hargraves Drive, theswitchdripping.com). If there’s such a thing as good corporate barbecue, Switch is it. The dining room is huge and bright, and there’s nary a whiff of smoke to be detected. A horseshoe bar dominates the space, and while the ‘cue was passable (ribs beat out brisket, and we’re told we should return to sample the Cajun fare that sets this place apart from its Austin sibling), the bar and its feisty female ‘tenders stole the show. Ask for a sample of the pit-smoked pineapple that goes into a sweet but potent rum drink. This was not our first drink of the day, and now’s as good a time as any to confess that the goal of this Sunday foray was neither historical, cultural, nor, really, culinary: we were in it for the booze and beer. The ring of distilleries, breweries, and, for that matter, wineries, that almost encircles Dripping Springs (called Drinking Springs by one wag) makes it unique among Texas small towns and argues for using the town as a headquarters for a more in-depth examination than we were able to conduct. But, starting with Desert Door Texas Sotol (211 Darden Hill Road, Driftwood; desertdoor.com), we still managed to touch down at an alarming number of destinations.

Sotol is not a spirit on everyone’s lips — yet, and actually making it was not the original goal of Ryan Campbell, Judson Kauffman and Brent Looby. The trio met in the fall of 2015 in an executive MBA program at UT’s McCombs School of Business, they needed a project, and the rest is very recent history. After the partners produced over 40 trial batches in a domestic-scaled still, the first bottles deemed worthy of prime time emerged in the fall of 2017.

That all three are ex-military may have something to do with the speed at which a theoretical enterprise became a working business. Kauffman, the still-trim Navy man among them, met us at the distillery and spun out the story as an almost-fanciful Texas yarn that just happens to be true. Having tasted Mexican versions of sotol (Hacienda is one of the first to be available here), he realized that the plant, also called Desert Spoon, grows wild and abundantly in West Texas — up to  more than 1000 per acre in some places. “There are billions; we’ll never run out,” says Kauffman.

This spiky asparagus sibling flaunts a tall, central stalk, but it’s the bulbous base that’s processed much in the manner of tequila: it’s harvested, trimmed, steamed, shredded, pressed, fermented with  addition of some commercial yeast, then distilled — here, in a gleaming, new hybrid pot/column still that had just been installed the week before we arrived. The spirit is presented in a deep blue ceramic bottle made in Mexico and more than stands up to examples from that country. (You can find it in San Antonio at Alamo City Liquor, Cured and Paramour among other locations.)  We also tasted a soon-to-be-released, small-barrel-aged version, initially to be available exclusively at the distillery. Bar manager Bobbi Hitchen makes a mean cocktail with mesquite-bean infused Desert-Door, too.

Buckle up; there’s more to come. The driving circuit between Desert Door to the south of Dripping Springs, and our final destination of the day, Family Business Brewery to the north, took us past perhaps a dozen enticing options — and this doesn’t even include the big boys, Dripping Springs/San Luis Spirits (vodka and gin — not open on Sunday) to the west of the town, and Deep Eddy (vodkas), just to the east.

Our first intermediate stop was at Jester King Brewery (13187 Fitzhugh Road, jesterkingbrewery.com). Situated on 165 acres, the sprawling stone and corrugated-tin complex, which includes two tasting bars and Stanley’s Pizza Kitchen, is exactly what a dyed-in-the- wool Texan might come up with when asked to imagine the ideal, rural brewery setting. Apart from their wild yeasts, the farmhouse ales and barrel-aged wild ales are more disciplined than the setting — and these brews are not for the faint of palate. But there are lots of guest taps if somehow the Raspberry Funk Metal (a stout re-fermented with raspberries) should come across as a step too far.

Jester King also offers guest ciders on tap, but wanting to sample from a source, we headed up the road to nearby Argus Cidery (12345 Paul’s Valley Road, arguscidery.com). The one-room facility is a part of a quasi-industrial complex that also contains Revolution Spirits (gin) and Last Stand Brewing Company. Argus is a highly recommend stop for its briskly dry ciders poured by the maker himself. We suggest a tasting flight or two.

Moving on, our next port of call was Treaty Oak Distillery (16604 Fitzhugh Road, treatyoakdistilling.com); its ranch-like setting, with tables scattered under massive oaks and an open-sided bar, makes it the distillery equivalent of Jester King. Though rum was an early success (they made the state’s first), and there was vodka for a time, gins, including the barrel-aged Waterloo Antique, and small-batch whiskeys are now the primary focus. Here we only had time for cocktails from plastic cups, so a return visit will be required to get deeper into the base spirits, along with the fairly ambitious food menu. 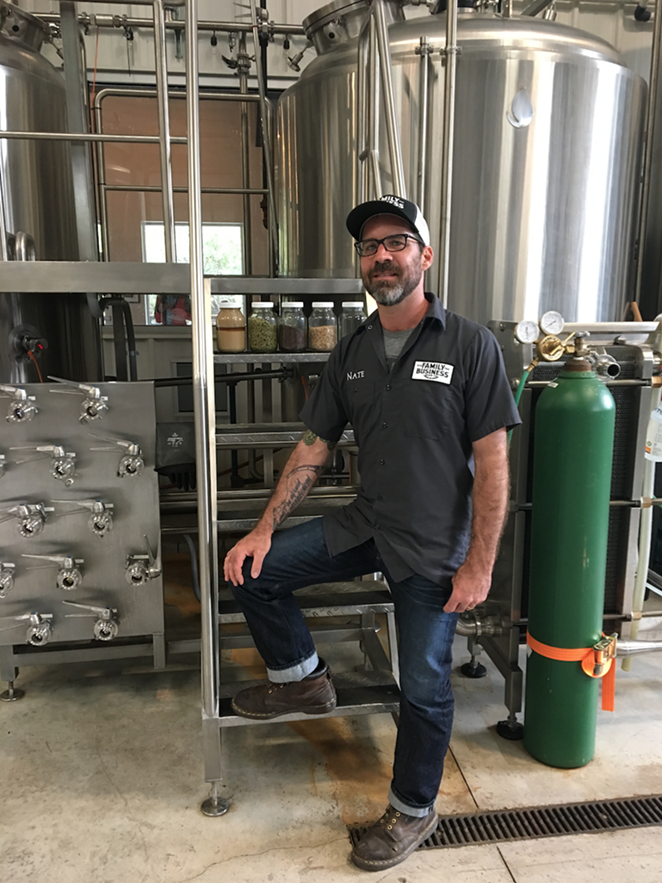 It’s not easy to launch a new craft beer or spirit; the market is already pretty crowded. But Family Business Brewery (19510 Hamilton Pool Road, familybusinessbeerco.com) has a leg up: the family includes Jensen Ackles, a star of the popular TV series Supernatural. It’s of course super-natural that folks will want to visit the brewery, housed in a large steel-clad structure on 15 acres of pristine Hill Country land, in order to catch a glimpse of the chiseled star — but don’t hold your breath. Go instead for the beer, made by head brewer Nate Seale, a star in his own right. Flights are another good option at FBB; with 13 brews on tap, including an impressive Imperial Stout called The Grackle, it will be hard to choose without a little help. Once you’ve made your choice, stay inside at the handsome, tall tables, or head to a picnic table under the oaks. Despite encroaching Austin, oaks still rule in Dripping Springs.