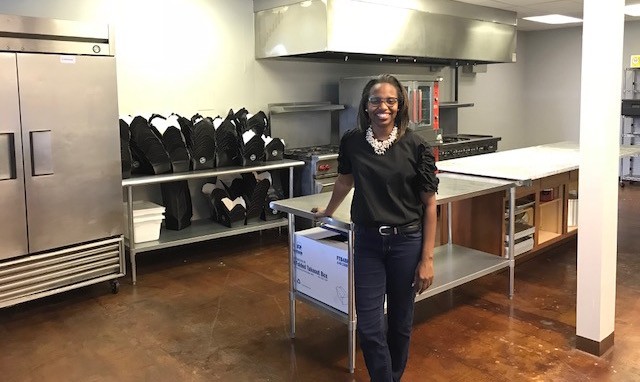 It’s not that entrepreneurship is having a moment. But as San Antonio celebrates the second-ever Startup Week through Friday, October 26, it’s kind of the best time to be an entrepreneur because there is a plethora of knowledge available for would-be business owners.

This year’s SASW, sponsored by the 80/20 Foundation, Geekdom, USAA and Trinity University, features more than 75 events ranging from happy hours to open houses and panels. One event repeats through Thursday afternoon, and might be useful for most San Antonians trying to get into the food-production business.

Though it still physically bears the name of the business that came before it (Sue Sheff, a local food delivery service that’s now closed), Alamo Kitchens is hoping its interiors will be familiar to San Antonians in need of a commercial kitchen.

Owner Tracie Shelton, a small business advisor at UTSA’s Small Business Development Center, has a background in accounting and marketing. But her love of food and food business developed after the birth of her daughter, when Shelton realized the power of food as medicine, education and wellness.

She developed a business plan through the help of Launch SA, and was awarded $15,000 through the accelerator’s Venture Challenge program, so opening Alamo Kitchens happened sooner than she originally planned. Shelton was doing due diligence. She met with Michelle Soliz, the owner of now-closed Bake, Broil & Brew, to learn of the struggles she’d faced, and was searching for a space in the city’s East Side when the central San Antonio location with a fully equipped kitchen (complete with a commercial vent hood that regularly costs restaurant owners at least a couple grand to install) became available.
It was too good to pass up.

For now, the space serves as a prep kitchen for caterers such as chef Kenny York of Leviticus Catering, and meal-prep companies. It’s the kitchen for the growing Doubleside Toffee Co., and the popular Crepelandia, which preps there before their busy days at the Pearl Farmers Market.

Alamo Kitchens serves a culinary co-working space. All partners adhere to a handbook. All have access to the merchandiser refrigerator to store goods for the day. All have 24-hour access to the 1,154-square-foot space and can schedule blocks of time online. It’s like Geekdom, but for caterers, restaurateurs, pop-ups and more.

If there’s ever a time to think of a restaurant as a startup, this would be it. Generally, just over 20 percent of restaurants fail or close within their first year. In San Antonio, commercial kitchens are hard to come by. Finding a space with a flat fee that includes business mentorship, connections to attorneys and other business services, and marketing help like Shelton plans to offer – all of that could mean entrepreneurs who dive into the food industry might make it work after all. It could help someone fulfill a dream or show them that maybe the culinary field isn’t a good fit — without the huge investment.

If growth goes as planned, Alamo Kitchens will eventually open a larger space that Shelton is still on the hunt for. But for now, she’s focusing on San Antonio Startup Week. The kitchen is open daily at 4:30 p.m. through Thursday.

Does your business have what it takes?