Savoring Savor: Culinary Institute of America San Antonio Evolves with the Addition of Its New Restaurant

The Alamo City has always been a destination for great food, but the Culinary Institute of America arguably helped put it on the radar for the rest of the world.

The CIA-San Antonio is hoping to further build on that reputation with Savor, its new restaurant, opened this month at the Pearl.

“I’ve been coming here for 10 years and the food scene has exploded,” said Waldy Malouf, the institute’s senior director of food and beverage operations. “The [current] interest in food is 10 times what it used to be. It was either Mexican food or steak and potatoes. Today, [San Antonians] are taking an interest in their food, where it’s coming from, how it’s cooked and how it’s served. I’d like to think that the CIA had something to do with that.”

Silver Ventures owner Kit Goldsbury, the billionaire behind the Pearl’s revitalization, helped make the center an official CIA campus in 2008 via a $35 million investment. The CIA runs schools in New York, California and Singapore, and has helped train many of the chefs often associated with the Pearl’s vibrant dining scene, including Steve McHugh, Johnny Hernandez and Andrew Weissman.

CIA’s campus restaurants play a major part in its programs. Designed to educate culinary students before they graduate and move on to professional kitchens, the establishments connect students with customers and help make new cuisines accessible to the public.

“For various reasons, we decided to close NAO, return it to Pearl and open a more intimate setting more conducive to education and a better experience for our guests,” Malouf said during a recent kitchen tour. 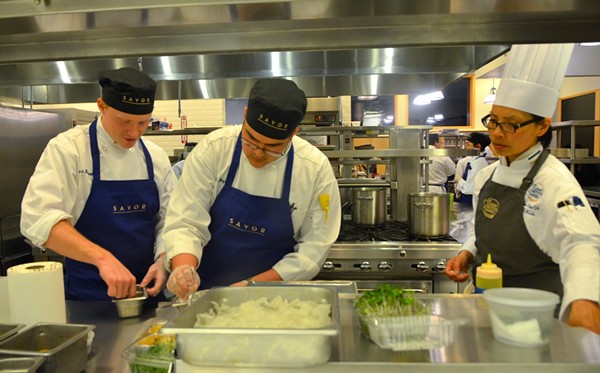 “This is probably one of the greatest kitchens in the state,” Malouf said.
Savor patrons can expect to see affordable meals and pastries made by students. A three- or four-course meal will typically run $38–$44.

Former CIA instructors, chefs and students have gone on to connect with new creative projects or entrepreneurial opportunities. Chef Elizabeth Johnson, a former student instructor at NAO, has since opened Pharm Table and plans to establish a new restaurant with chefs Hernandez and McHugh at La Villita. Graduate Diego Galicia went on to open Mixtli. Chef Geronimo Lopez left NAO to eventually open and run Botika at the Pearl.

David Arciniega, front of house manager for Southtown’s Maverick Texas Brasserie, worked at the CIA for five years in a number of different roles, including server, bartender and cook. A graduate of the culinary program at St. Philips College, Arciniega was working a non-restaurant position when he attended a CIA job fair.

“I went to apply for a job on my lunch break, but I ended up going into a three-hour interview. I had to call my boss and tell him I wasn’t coming back,” he said. “I didn’t have references like some of the other servers and hosts who were hired, but I made the cut.”

Arciniega’s first job at the CIA was helping open NAO in 2012, and the experience showed a new side of local dining culture.

“It was an eye-opener to see the quality of service they were going for — the plates, the cuisines, the bar program — there weren’t a lot of places in San Antonio trying to achieve that,” he said. “It was a big challenge day-to-day, trying to get people to understand what we were. NAO was the first place that I knew of to host chefs, do these dinners. I was exposed to everyone from Thomas Keller, Rick Bayless, Pedro Miguel — chefs and networks I’d never gotten to meet on my own. I worked along with them.”

Arciniega went on to help train several student classes working in the restaurant before launching his own restaurant — Amaya’s Tacos, which closed in 2017. After that, he helped open Botika and moved on to Maverick.

“We’re providing a quality education to our students and our guests,” said Savor head chef Pedro Miguel Schiaffino. “The menu is a true representation of what we teach. I think the guest will really respond to the ingredients and flavors we use.”

CIA staff and alumni are also confident the campus and Savor’s broader appeal will bring in new guests, especially locals, who sometimes see meals at the Pearl as inaccessible.

“As Austin gets larger and more expensive, it opens doors for chefs and restaurants that weren’t necessarily here just a decade ago,” Malouf said. “For now, we’re looking to become part of the culinary fabric of the city. That’s very important to us.”