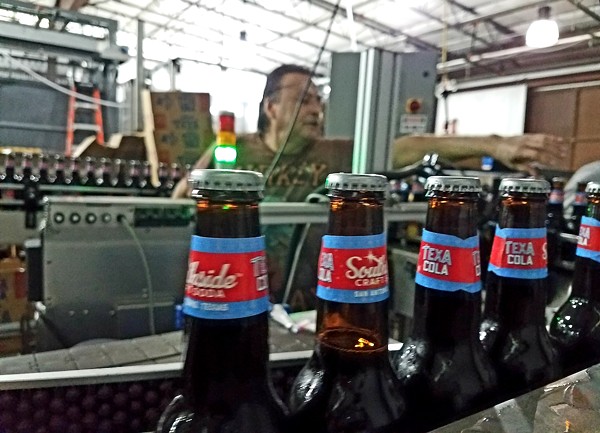 Southside Craft Soda Co. was developed by an unlikely team — a local brew master, an ad executive, an entrepreneur and an accountant — but together, this February, they bottled 700 cases of TexaCola, becoming the first locally owned and crafted soda to distribute in San Antonio in 50 years.

“I think there’s a lot of pride in the South Side [and its culture], and that’s what we have going on here,” said co-founder Andrew Anguiano, the ad exec in the mix. “We have a lot of pride in what we’re making.”

The market for sodas with natural, less-processed ingredients has grown, despite increased health consciousness and an overall drop in soda sales. While the whole team has certainly hustled to fill that void in the local market, the idea for a craft soda line began with Gregg Spickler, former head brewer at Alamo Beer Co. During a 2016 trip to Germany, he discovered a flavorful small-batch soda made with beer hops and citrus.

The trip inspired Spickler — also a beekeeper and owner of Winding Road Provisions, a business selling wax and honey-based products — to develop a soda using locally-sourced honey. He soon met and partnered with Anguiano, who had toyed with a similar idea. The management team has since expanded to include local entrepreneur Rob Rodriguez, a Southside First Economic Development Foundation board member, and Paul Randles, a finance veteran and procurement executive at food distributor Sysco.

TexaCola, the first Southside soda to hit the market, is made with local honey, Mexican cane sugar and Rio Grande Valley citrus. Honey cream soda, root beer and pineapple are all in the refinement stages before going into longneck bottles using the bottling line at Alamo Beer.

Though small batches of TexaCola have been produced for accounts like Larder at Hotel Emma and the in-room bars at Hotel Havana, the soda should be easier to find in the coming months as its distributor, San Antonio-based Hops & Vines, gets the word out to bars, restaurants and retailers.

Southside executives say they are in talks with San Antonio-based grocery powerhouse H-E-B for a major retail presence.

In partnership with Spickler’s Winding Road, Southside also will use a converted house on Roosevelt Avenue near Mission Road and Mission Concepción as a store and gathering place for Southside Craft Soda and Winding Road provisions. Eventually, they’ll house production onsite.

“This will be another place for people to visit after going to one of the missions,” Anguiano said. “People are busing in and out, but not going anywhere else on the South Side, which puts all the economic impact downtown.”

The ingredients for Southside’s sodas are more expensive, and lack of economies of scale lead to higher costs. However, affordability is key to moving from bars and restaurants and into retailers such as H-E-B. It also encourages residents to be proud of their city and heritage.

“We’ve been living here hundreds of years,” said Anguiano, who traces his family to some of the earliest San Antonio settlers. “We don’t want to give people something (priced) to get us run out of town.”

Tristan Maldonado, founder of Southside’s distributor, Hops & Vines, said craft beverages with natural ingredients and unique flavors don’t have to be priced as a luxury. Southside is the first non-alcoholic beverage to be sold by his company.

“We want any San Antonian to be able to afford it,” Maldonado said. “We are going up against Coke, Maine Root, Dr. Pepper and Snapple. Texans identify with things that are made within their state lines.”

A 2017 report by market-intelligence company Mintel found that iGeneration millennials, who are increasingly looking for more healthful options and flavors, will be central to future sales growth. In 2016, the U.S. wholesale craft soda industry was estimated to generate $541 million annually with projections to expand.

Four-pack and single bottle prices are still in the works, but Southside is continuing to look for natural ingredients and local sources when possible. Besides area honey and lemons and limes from groves around McAllen, future soda flavors could include regionally harvested mesquite beans in a root beer and even native mustang grapes, if they can be found commercially. Bringing on regional flavors such as piloncillo (a Mexican brown sugar) and tamarind will mean sourcing some ingredients from south of the border.

“I would like to see this in mom-and-pop stores and eventually in bibs (at bars) for soda guns,” so it can be served on draft and in mixed drinks, Spickler said. Demand for the sodas, even before they were officially released, has been great. “But we need to be prepared for H-E-B. We need to ramp up real hard, real fast.”