Adventurous Indian: Madurai Mes Excels at the Cuisine of South India, Including Exceptional Dishes That Celebrate the Simple 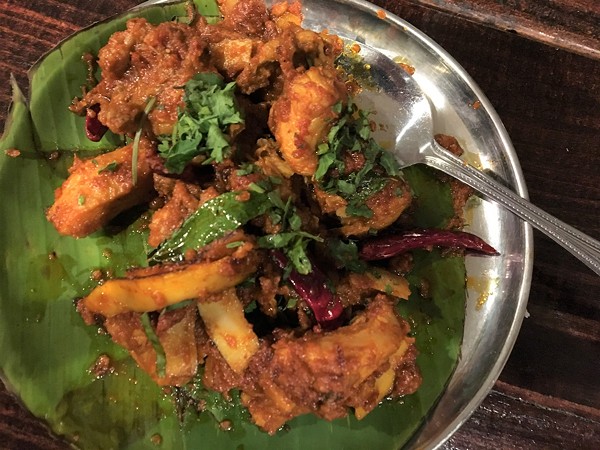 To walk into Madurai Mes is a walk into the unexpected: The space’s uniform, dunked-in-milk-chocolate color evokes Willy Wonka more than a vibrant memory of India’s mirrored fabrics and Bollywood musicals. There’s nothing wrong with playing against stereotype, but it does mean that diners will have to find sensory spirit and spice from another source, like its cuisine.

Fortunately, Madurai Mes delivers, though its hit-you over-the-head heat is not the defining feature. Let’s start with the Megalu Rasam, a soup — said to be “restorative” — that’s typical of the restaurant’s Southern Indian focus. Our server confirmed the soup’s holistic appeal: it’s good for colds and all kinds of maladies, but more to the point, it’s just plain good. The dish includes numerous spices, mostly peppercorn and cumin, each holding its own in a broth inflected with tamarind, garlic and a little tomato. I had never had anything quite like it — and I quite liked it.

Other vegetarian and non-vegetarian appetizers are almost a neutral experience, depending on chutneys and sambars for their special spark. Eggs Bonda begin with hard-boiled eggs before they’re dipped in a batter of rice and chickpea flours that is sometimes spicy, but here fairly mild. The same is true of the Kuzhi Paniyaram, a dish of fermented rice and lentil batter steamed in little cups. The simple, subtly sour cups would be unremarkable alone, but paired with a South Indian coconut chutney, they help introduce the hearty and ambiguously labelled dish Mutton Chops Dry.

The distinction between goat, lamb and mutton is often blurry in Indian cuisine, and Madurai Mes doesn’t provide clarity. The menu makes mutton synonymous with goat, but what appears on the plate appears to be lamb — neither goaty nor smacking of old sheep. The tender chops were smothered in a paste dominated by pepper and curry leaves; red onion added bite and a squeeze of lime pushed the flavors to the forefront. Give this a try — along with another spice paste-slathered dish, the Pallipayalam chicken from the southern Tamil Nadu region. Don’t be frightened by the dried red chili pods found in the dish, a creamy coating, made with fennel and mustard seed is just polite enough to let the chicken and slices of fresh coconut shine through.

On an early recon visit I tried more conventional curries, served with a choice of proteins from the menu’s South Indian Special column. None of the indicated 21 spices stand out in the Chettinad curry, (presumed) lamb version, which makes the dish more comforting than exciting. The Andara Kura with tilapia was only slightly more exhilarating. Its coconut and poppy seeds weren’t especially obvious, but as whole, the item was quietly appealing, especially when served on torn Veechu Parotha, a layered and folded flat bread.

A tiffin meal in India falls somewhere between a full lunch and a snack. The restaurant’s mini tiffin column suggests snack-sized servings, but an order of Chole Batura would keep most mortals full until late dinner. The plate comes with a puffy, lightly oiled flat bread and a pot of incredibly savory chickpea curry. There’s almost more excitement in learning (or relearning) that a seemingly pedestrian vegetable curry can be more satisfying than discovering a new dish. Almost, but not quite.

Enter the Vatha Kolambu — in summary, a gravy-like curry made from buttermilk-soaked dried vegetables “cooked in a tamarind paste.” The description could easily take up several paragraphs, but let’s just label it a must-try. Let’s also point out that one of its defining factors is the presence of salty-bitter dried black nightshade berries. They lend an intriguing and essential pop of flavor to a surprisingly well-mannered meal.

In addition to its regional Indian menus, the restaurant offers an extensive list of Indochinese dishes. Maybe think of them as the imported, Tex-Mex of Indian cooking. There are subdued spices, the appearance of soy sauce and more noodle dishes. A personal favorite was the Gobi Manchurian. Available in a “dry” or gravy version, it demonstrates the versatility of cauliflower. For me, the Chili Potatoes Dry were less rewarding, partly due to the potatoes’ somewhat flabby texture. But the fried patties found in the Veg Hot Garlic Dry hit the spot. The combination of finely chopped vegetables developed an almost meaty texture and flavor, while licorice-like notes stood out from the rogueish garlic sauce. Take that, Swiss Miss cocoa mix décor.