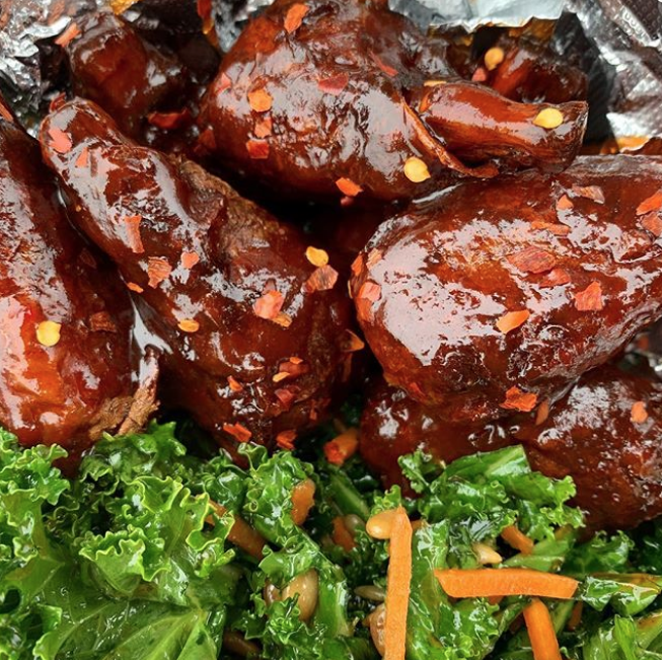 Earth Burger at Park North is kicking off its weekly "Wing Wednesday" events — a night dedicated to flavorful vegan wings available in Buffalo, BBQ and Gochujang flavors — with a friendly wing-eating competition and $1,000 prize on Wednesday, April 17 at 6:30 p.m.

Resident vegans are invited to join the 5-minute wing-eating contest for a chance to win $1,000 in gift cards to Earth Burger, and a matching $1,000 donation to their choice of participating local charities, including the Humane Society and CASA.

“We want to introduce the public to how delicious vegan wings can be while doing something good for the community,” stated chef Mike Behrend, founder of Green Vegetarian Cuisine and Earth Burger.

Behrend and Austin-based vegan restaurateur Isaac Mogannam of PLOW Burger will also be there to eat all the wings and cheer on contestants. Celebrity judges will be on-site to award gift cards to contestants who deserve titles like "messiest eater.''

All of Earth Burger's wings are sourced from Mogannam's Plants Lead Our Way (PLOW) Distribution company, which supplies its vegan-friendly food to more than 50 restaurants, hotels and food chains. Each wing offers five grams of protein.

“They taste just like traditional wings, if not better,” Behrend stated. “You have to taste them to believe it.”

Those interested can enter the contest starting April 10. To enter the competition, email marketing@eatearthburger.com.