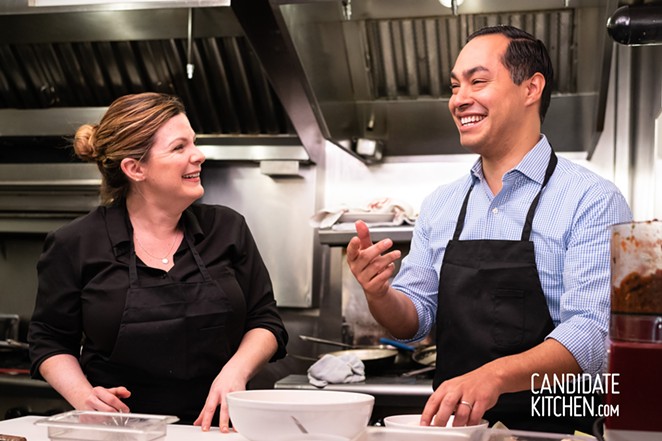 San Antonio native and 2020 presidential hopeful Julián Castro was recently a guest star in the premiere episode of "Candidate Kitchen," a new YouTube web series showing candidates “prepare and share meaningful recipes with the stories that give them flavor.”

In a puro move, Castro prepared potato, bacon and egg breakfast tacos as well as a delicious looking chipotle-based salsa alongside host Chef Julie Cutting Kelley, the owner of Portsmouth, New Hampshire restaurant Cure, where the episode was filmed. In his reasoning for sharing this specific recipe, he referred to San Antonio as the “breakfast taco capital of the world.”

As the tacos were being prepared, Castro shared stories about him and his brother Joaquin regularly waking up in the morning to find their grandmother rolling tortillas from scratch.

He also shared a cute story about ordering nachos on the first date with his wife Erica Lira Castro. He was concerned she didn’t want to be on the date because she didn’t order anything for herself, but as the date went on she got comfortable and started sharing the nachos with him. He mentioned plans to go back to that restaurant and order those nachos again on their anniversary.

According to Candidate Kitchen director/producer Sally Northrop, a goal of the show was to provide a nice way for people to get a look at candidates as individuals and human beings, because that can sometimes get lost in the running process.

“[Castro and his representatives] liked the idea of the show because it’s sort of a break from all the politics..it’s just an opportunity for him to share who he is as a person, to make a personal recipe that has meaning for him, and through his sharing of the story behind his recipe, we got to learn a lot about how he grew up and what his family’s like,” she said.

The show’s producers wanted for the episode’s release to coincide with Wednesday night’s debate to give him some extra publicity. Northrup described Castro as “game for everything, charming and a good sport.”

As Castro chose to make breakfast tacos in his episode, future guests will be asked to select a recipe that has personal meaning to them and share some of the stories revolving around those dishes.

Even though the show has just premiered, the production team is open to having running mates and other non-presidential candidates guest star to share their stories and recipes. Though they were unable to comment on future guests in upcoming episodes, the charm of the series makes it worth keeping up with to catch more personal recipes and stories.