In Southside San Antonio, where neighborhood corner stores outnumber grocery stores, residents are more likely to find Fritos rather than fresh fruit. And when produce is available, it's likely to sell for multiple times the amount it would cost at an H-E-B.

It only makes sense that residents of the Southside's District 3, San Antonio's largest food desert, have the highest rates of obesity in the city.

However, just four months into the ¡VIVA SA! Healthy Corner Store Initiative, a pilot program aimed at bringing fresh and affordable produce to the district, sales of fruits and vegetables there have increased nearly 600%.

“This is such a blessing. We have food stamps, but most stores around here just have candies or sodas," District 3 resident Selena Salazar said. "The program allows me and my daughter, who’s 17, to enjoy a healthy lifestyle.” Since the program's launch, produce sales have skyrocketed from 613 pounds in April to 4,143 pounds in August.

The initiative allows residents such as Salazar to purchase healthy foods from a nearby corner store rather than make the trek, often by foot, to the nearest H-E-B on South New Braunfels Avenue.

"Within the last three months, we've seen a lot of new customers come in, especially ladies, who want to buy fruits and vegetables," said Gas N' Go Owner Shaukat Momin. "It's safer and easier to shop here than it is to go to the [grocery] store. Not everyone has transportation." 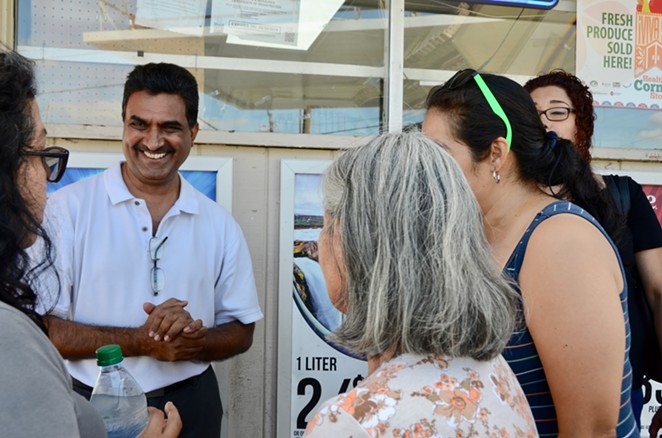 The program's success has even surprised Dr. Anil Mangla of UIW's School of Osteopathic Medicine.

"We expected the program to taper off, but it's more than exceed our expectations," he told the Current.

Mangla said the project is expected to grow from seven stores to 12 or 15 over coming months. At that point, produce sales are likely to jump further — from 600% to 4,000%.

"We're hoping to grow this program to more stores and we're looking to outside funding to make this sustainable for residents, store owners and the community," he added.

Editorial Correction: A previous version of the article referred to Dr. Anil Mangla of UIW's School of Osteopathic Medicine as the founder of ¡VIVA SA!; Mangla is one of the program partners.