Needs a Little Aging: Maverick Distilling and Brewing is Blazing New Trails, and the Kitchen Sometimes Keeps Up

The Lockwood National Bank building languished unappreciated for much of the 21st century until the arrival of its saviors, Drs. Ken and Amy Maverick. Ken Maverick is a direct descendant of Samuel Augustus Maverick, a signer of the Texas Declaration of Independence and owner of the land used to later build the bank.

Since their takeover, the building’s former cash deposits have been replaced with gleaming distilling and brewing equipment that turns out other liquid assets: freshly minted whiskey and gin, along with an ambitious roster of beers — and even a restaurant.

There’s much more literature on the history and distilling at Maverick, but there’s nothing like first-hand experience. I walked in one day hoping to score a slot in Friday’s noontime Distiller’s Tour ($12). Turns out it was just me and head distiller Rikk Munroe. Monroe may look young and inexperienced, but he already has a double gold from the San Francisco World Spirits Competition under his belt — admittedly for a bourbon that began life in Tennessee and Kentucky then came to Blanco to be aged at Ben Milam distillery under his tenure as head distiller.

These days, however, Munroe is all about “grain to glass,” and at the end of your tour you’ll have the opportunity to evaluate his success so far with spirits that are admittedly young and inexperienced. Maverick calls its unaged, Texas wheat-based Light Whiskey a “vodka drinker’s whiskey.” Not true. Like it or not, this spirit already has far more character.

Still a foundling, Alamo Whiskey, a four-grain blend featuring a fair amount of corn, is aged for precisely one day in new American oak barrels that populate the former basement vault, and it’s amazing how much difference that makes. Gin needs no aging, and a sample of Maverick’s take on this classic, softer and lighter on juniper than a traditional London dry, but proved to be a worthy variation. It was fragrant with mint marigold, coriander and pecan. Maybe a little too soft to stand out was a spirit Munroe makes from agave nectar imported from Mexico.

Tour complete, lunch was then just an elevator ride away. 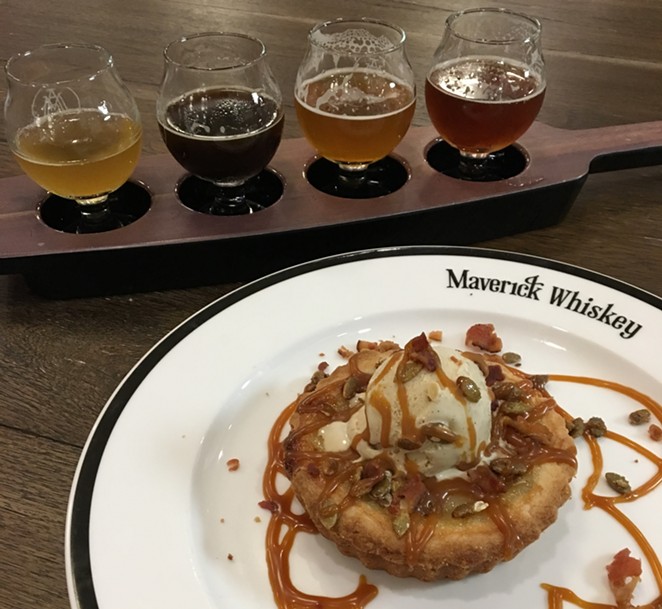 I probably wouldn’t repeat the Cubano sandwich, however. Not exactly a counterfeit Cubano, it was diminished in my estimation by trying too hard. The house-cured ham — boiled ham is usually sliced, deli-style — was present only in wisps. What’s more, the braised pork belly — traditionally, sliced pork shoulder — was too loose and fatty for my personal taste, and the whole thing didn’t seem to have been pressed enough to bring the house-made mustard and sliced Swiss fully into the party.

Sam Maverick lent his name to the term “maverick” that today stands for someone rebellious. Back in the day, it came about because of his refusal to brand his calves. That the current generation has no such branding qualms, you need look no further than the impressive dinner plates: “Maverick Whiskey San Antonio, Texas” is emblazoned there for all to see. This sets up certain expectations of proudly sized servings, and those expectations are met in appetizers such as the smoked Gulf redfish canapes. Lofted by a mound of baby greens and encircled by a syrupy balsamic drizzle, the crostini were more dry than buttery and toasty, but they were nevertheless a reasonable platform for the delicate, shredded fish and its accents of pico de gallo.

My entrée arrived looking even loftier. Billed as a Whiskey Citrus Brined Double Cut Pork Chop, the plate unfortunately misfired from the get-go. I suspect most of us agree that two fives stacked atop one another have the same purchasing power as a single ten. The same does not pertain to pork chops. Yes, with two thin ones I got had twice as many grill marks, but the expected juiciness and tenderness had been replaced by something dryer and less appealing. Even so, some good flavors from marinating did emerge. Served a little less soupy, the chops’ bed of braised bacon, spinach and kale with roasted sweet potato would have been a perfect companion.

Pumpkin Beeramisu won cleverness points on the dessert menu, but since I’d done a flight of the four available beers on tap — Mission City Blonde Ale, Lockwood English Porter, Sam Maverick Rye Pale Ale and Sam Maverick Nashville Hot Chicken — and hadn’t found one that thrilled, it fell to the Whiskey Desperation Pie to usher out the evening. The flavors here, enhanced by a salted caramel drizzle, candied pepitas and bacon shards, were all terrific, but the sturdy, cookie-like crust was too thick to allow for much of the old-fashioned filling — an easy issue to fix.

Like the spirits, the kitchen just needs a little maturation time.