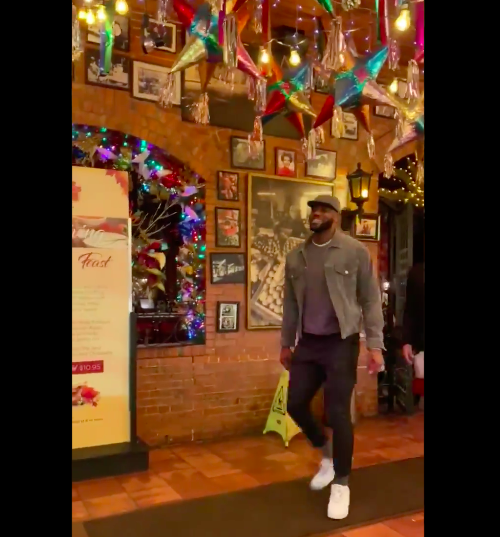 After handing the Spurs another loss Monday night, the Los Angeles Lakers did what many San Antonians do for a celebratory late-night meal: hit up Mi Tierra.

A video posted by Twitter user @Ooh_Rhiann early Tuesday morning shows members of the LA team walking through the restaurant's foyer and bakery and exiting to Market Square. While most of the team didn't pay attention to the folks in the restaurant with their phones out, LeBron James was surely in the spirit.

Known for sharing his weekly celebration of "Taco Tuesday" (a phrase he recently tried trademarking — nice try, King James) on social media, James enthusiastically repeated the phrase after someone in the crowd egged him on, much to the crowd's delight.

According to a KSAT report, an employee at the restaurant said the team dined in a private space on the patio after midnight.

While James was in the spirit to interact with fans, former Spur Danny Green wasn't as willing. People called out his name as he walked out with the team, but he put up his hood rather than wave or smile.

Ouch. Maybe he would have rather gone to Whataburger.

After dining at the restaurant, the team then partied at Ash in St. Paul Square. Sounds just like James and company to do so.