How did Cake Thieves get started?
Lauren O’Connor: I’ve always had some form of a baking business, ever since 8th grade. I always knew I wanted to have a bakery and become a baker. I eventually became vegan and started the company when I was living in Brooklyn in 2012. I got really into cake decorating, but I was also really into seeing bands, so I’d bake cakes for bands as a way to practice. A Chicago band called Company of Thieves loved the cake I made. After the show, when people asked about the name of my company, the guitarist suggested Cake Thieves, so we’d be connected forever. I eventually got tired of Brooklyn, but I had friends in San Antonio, so I moved here in 2015.
Kia Geronimo: I was working at a bakery downtown when I met Lauren. I happened to have money set aside that I wanted to invest in something great. After a year or so, I asked her if she wanted to [run the business] together.

How have things changed since Cake Thieves launched locally in 2016?
LO: There really wasn’t anything like [Cake Thieves] here when we started it four years ago, but now there’s tons of vegan options. We only make desserts that taste like the real thing. We also just celebrated the two-year anniversary of our Vegan Stop Shop in November, and it’s continuing to grow.
KG: A lot of the local vegan businesses that are open today started at the Vegan Stop Shop. It’s so cool to see them have actual [store fronts] now. The market has essentially become self-sustaining.

What’s your signature product?
LO: We make around 15 different pastries right now. We make everything from croissants, cookies and cinnamon buns to kolaches and donuts and cakes.
KG: Our most popular product would probably be our donuts or pop pastries, which are filled with fruit fillings. Sometimes we get crazy and the pastries end up being the size of our head. 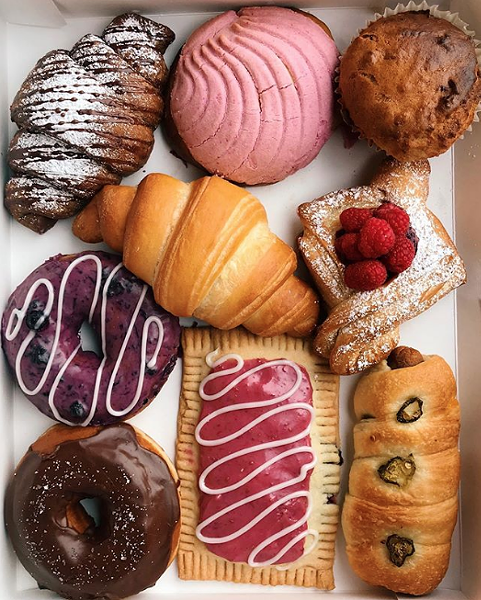 What’s the biggest misconception about what you do?
KG: That all vegan food is healthy.
LO: Vegan junk food is fine once in a while. Just make sure the rest of your diet has leafy greens. (Laughs.)

What’s your secret weapon?
LO: We work a lot of 18-hour days. Coffee and the music of [Swedish pop star] Robyn help me get through the long days and work weeks.
KG: I pick up coffee from all the shops we deliver to, and I’ll pick up several at a time to get me through the entire day.

What’s next for you?
LO: We’re opening a new spot at Hackberry Market this year. The [space] will have a full menu with breakfast, diner food and new pastries like tarts and cakes. I come from the land of diners, so it’s been a dream of mine to open a vegan diner.
KG: We’ll have a coffee bar there too. We’ll eventually open another eatery, but we don’t want to give away too much just yet.