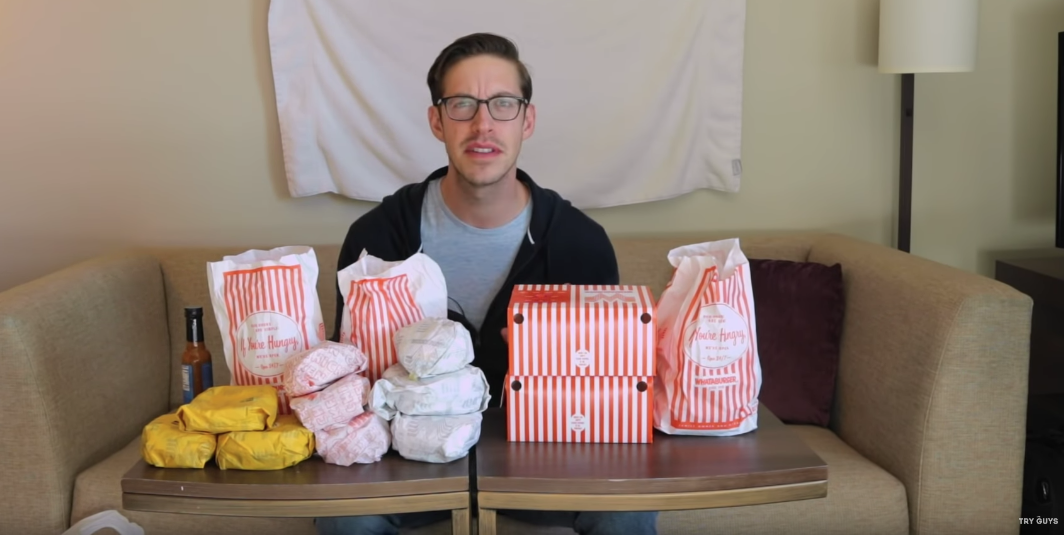 YouTuber Keith Habersberger has some choice words for Whataburger.

As one-fourth of The Try Guys, the online star has gained a massive following for his solo adventures in Eat The Menu, an ongoing series in which he tries every menu item at various fast-food chains.

The California-based creator released his Whataburger video Wednesday, and he was not kind. Keep in mind that Habersberger ordered from a Whataburger location in Arizona and received his food via DoorDash.

Every other chain tastes the same regardless of location. Sounds like they need better quality control. SHOTS FIRED


"First impressions, it smells like Sonic," he said. Although he goes on to say he loves Sonic, most Texans wouldn't put the two chains in the same playing field.

Habersberger starts off the 29-minute video with all of the chain's chicken items. He immediately makes a note of how "wet" the grilled chicken sandwich is, saying it's "sopped" with so much oil that it changed the color of the bun.

"Maybe it should be called 'Wetaburger,'" he quipped.

While Habersberger didn't mind the cooking of the grilled chicken and how it paired with the sandwich's cheese and peppers, he did throw shade on the new Whatachick'n sammy and chicken tenders, the latter which he said were "so boring."

Habsberger was kinder about the burgers — mostly. Though he said he liked the standard Whataburger, he didn't like it better than Burger King's Whopper. He somewhat redeemed himself when he said the burgers got tastier with each additional beef patty.

"I'm so glad this happened," he said. "I know everyone who's watching that's a Whataburger fan is like, 'Keith doesn't like it? Fuck him!'"

He wasn't wrong. Since the video — which has 1.2 million views — was shared, Texans have been defending Whataburger's honor.

I’ll be in Austin, TX next month. You can choose 5 things for me to try again at Whataburger and I’ll let you know if it’s better.


Whataburger even reached out to Habersberger so he can give its food another try.

Hey Keith! Let us know when you’ll be in Austin. We’ll reserve you a table and make sure you get to try everything that makes Whataburger great!


It seems the burger chain wants to prove its worth following the YouTuber's claims.

"It's kind of like In-N-Out meets a Burger King," he dared to say.

Someone let Habersberger know he's no longer welcome in Texas.