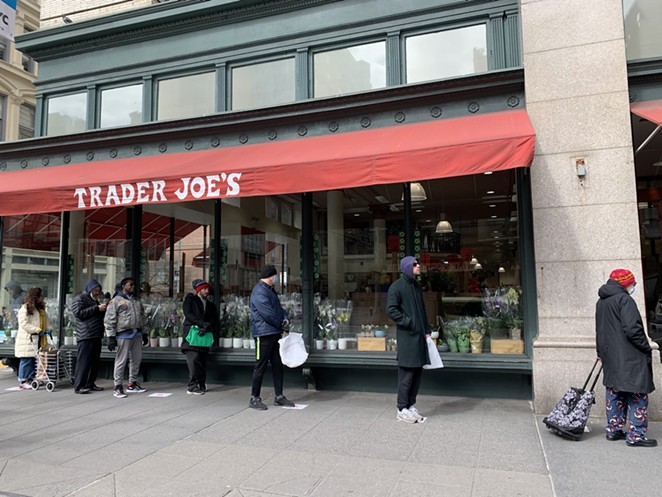 Editor’s Note: As the coronavirus pandemic escalated into a national crisis, grocery stores have become unexpectedly risky places to work. A Texan Trader Joe’s employee, who requested anonymity for fear of retaliation, reached out to the Current to offer perspective on what it's like to work during this crisis and voice concerns the company may not be taking adequate measures to protect employees. The Current reached out to Trader Joe's for comment, but did not receive a response as of press time. Trader Joe's has two stores in San Antonio.

Working at Trader Joe’s, long lines and big crowds have always been a reality, and we always handled it with a smile. But now, with a highly contagious — and sometimes deadly — virus spreading worldwide, what was once an everyday occurrence now poses high risk for employees.

Trader Joe’s works hard to project the image of a happy-go-lucky store that supplies its customers with exciting and interesting products. As part of its company culture, it adopted the Japanese concept of “Kaizen,” in which every employee — from a cashier to the CEO — works to continuously improve the company’s functions. In our store, we use it in our day-to-day work to better ourselves, our practices and our customers’ experiences.

But the COVID-19 pandemic has shown that the company has little regard for the safety and health of its loyal employees — and its customers too.

Right now, it feels like Kaizen has fallen by the wayside.

Like many companies, Trader Joe’s put out a statement promising updated cleaning and hygiene practices to help combat the coronavirus. But no detailed updates or rules have been communicated in my store. If any internal statements were sent to management instructing store staff to do anything but clean a little more, we as lower ranking crew members haven't heard or seen them.

At my store, there's a lack of communication regarding procedural cleaning and few social distancing rules, and we have been discouraged from wearing protective gloves. For a while, I was under the impression that these experiences were exclusive to my specific Trader Joe’s, but posts on social media and a recent Buzzfeed News article suggest my experience isn't isolated — it may be occurring at most of our locations across the country.

@TraderJoesList @@TraderJoesUnion this is just the tiniest amount of the overcrowding and lack of social distancing that is going on in your stores. The employees on the floor are concerned but management is not and seemed irritated to have this pointed out to them and said, well pic.twitter.com/LLWAXAPYP0


While many companies have created mandatory cleaning and isolation protocols to help combat coronavirus transmission, to my knowledge no such protocols have been issued by the Trader Joe’s corporate office. We lack a unified voice of direction. Instead, each store is responsible for its own cleaning methods.

My store has increased cleaning, but not by much. During my shifts, I’ve been able to find time to quickly wipe down the register and card reader — and sometimes hit door handles with a sanitizer wipe — but not much else. We have received no extra supplies to accommodate the extra cleaning.

In reality, this is just a slightly bolstered version of our standard day-to-day cleaning, especially with how busy the store has been. Weeks ago, before the pandemic really took off in the U.S., our cleaning protocols were essentially the same as they are now.

From what I've seen in my position, Trader Joe’s has only weakly attempted to implement any social distancing rules. Although the stores are generally much smaller than typical grocery stores, until recently there was no limit to how many customers could come into Trader Joe's at any given time. There is no company-mandated exclusive time set aside for elderly and immunocompromised customers to shop, so they are at the mercy of timing and chance. Additionally, while we have been able to accommodate curbside pickups in small numbers upon request, the service has not been formally implemented at stores.

This weekend, management at my store introduced additional social distancing measures that included a limit to the number of people allowed inside, but a Reddit thread first posted on Friday indicates that the policies at my location weren't universal.

As far as self-protection goes, we have been told multiple times by management that we should not wear gloves, as it could "give customers a bad impression." Aside from employees' constant public interaction, this is especially concerning for us since we still accept and fill personal totes and bags with our customer’s groceries, raising the potential for exposure.

On Saturday, the company sent out a letter to clarify its position on gloves — namely, that there is no specific policy related to wearing them, and that anyone who wants to wear them can.

Yet the letter also states that the "usual approach" Trader Joe’s management follows is "talking with Crew Members about why gloves aren’t beneficial in keeping them safe and what message our use of gloves might send to our customers."

They finally caved on their no gloves policy (and lied about it, but that’s bosses for you).


Hazards, But No Pay

While the Buzzfeed article didn’t spare H-E-B from criticism, the beloved Texan grocery chain has successfully implemented several companywide changes during this crisis to protect its employees and customers alike, including giving all hourly employees a temporary $2 raise.

Meanwhile, Trader Joe’s has only made trivial changes to its policies, and it's baiting employees with a bonus that's insufficient compensation for the level of risk we face.

Across the country, cities are shutting down. Trader Joe’s needs to provide workers hazard pay starting right now. Crewmembers are terrified, knowing their job is putting them on the frontlines of a global pandemic. It is not enough to receive PTO only after being proven sick.


On Sunday, March 15, the Trader Joe’s Union launched a petition for hazard pay for the company’s employees, which has received 19,642 signatures so far. In response, the company instead proposed a one-time bonus for workers that will be based on increased sales during the first month of the pandemic crisis. However, experts say the pandemic is in its early stages, so a one-time payment will not fairly compensate us for the continued risk we face.

Employees are also being misled by management into thinking the petition for hazard pay is a sign-up to join the union, which is simply not the case. Managers are speaking about it in a negative way, and some crew members have opted to not sign out of fear of retaliation.

Corporate is telling Captains to tell their crew that our petition for hazard pay is a petition to join the union.

That’s not how unionizing works, and it’s hilarious they think that.

The purpose of our petition is to secure hazard pay at a rate of time and a half. That’s it.


In the spirit of Kaizen…

A Seattle store has already been shut down due to an employee testing positive for COVID-19, and reports are coming out that an employee has tested positive in New York as well.

We’re told to smile and keep a cheerful attitude while our concerns are ignored, but deep down, we’re scared of the way things are being run. And you should be too.

Trader Joe’s cannot afford to keep reacting to this crisis after each development. Our company’s policies have to change immediately to protect our workers and customers.

So, in the spirit of Kaizen, I ask that Trader Joe’s treat and protect its crew members and loyal customers as well as it’s made the public think it would.