Canned Cocktails Make an Easy Pandemic Drinking Option, but Some Are Better Than Others 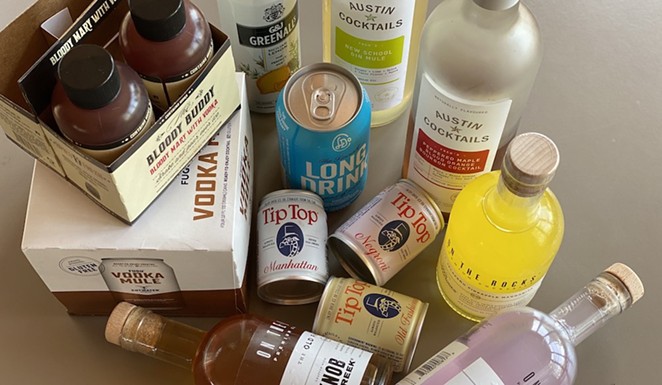 The first ready-to-drink canned cocktail appeared long before this pesky pandemic made us wonder if we’d ever see the inside of a bar again. It was 2014, and the cocktail was an Old Fashioned — not an especially difficult to drink to execute, but that was not the point. Grab-and-go convenience was more likely the issue.

If there’s still an audience not all that familiar with ready-to-drink cocktails, those folks may be blinded by the exploding hard-seltzer phenomenon. It’s a growing category born, perhaps, of a kind of desperate, if temporary, necessity. Pandemic aside, slamming a can or bottle into a tub of ice is especially easy in summertime.

Besides, as I recently found, some of them are actually good.

Tip Top Proper Cocktails are new to the San Antonio market. The brand offers three classic drinks in a series packaged in — there’s no other word for it — cute 100-mililiter cans. At 37% alcohol, the Old Fashioned is the highest proof ready-to-drink cocktail I tested — and, consisting only of spicy whiskey, sugar and bitters, it may have been the best. You can drink this one straight from the can, but it’s portioned to serve well in a rocks glass over a single large cube.

The Tip Top Manhattan affords the same sip-from-the-can option. It’s just bitter enough and its vermouth component stands up to the rye. If feeling fancy, you could add a Luxardo cherry. To the Negroni, I’d add more gin. When making my own, I always upend the classic formula, which is equal parts gin, Campari and sweet vermouth. For me, this was the least successful Tip Top offering. The “red bitters” component didn’t equal a good slug of Campari. But at 26% alcohol, I’d also feel less guilty about popping a tab on more than one.

Keeping with cans and icy tubs, the Finnish Long Drink was the first canned cocktail I came across. The original Long Drink, inspired by a Finnish post-war classic, is gin-based with juniper and citrus flavors, and it’s very bracing in a sauna-meets-snow kind of way. Except that, again, I wanted a little more gin taste. The cranberry version may even be better and is well worth tossing in the tub.

I had the same needs-more-gin thoughts about G&J Greenall’s Sicilian Lemon spritzer, which blends British gin, lemon and soda “with natural flavors and artificial color.” It’s tart-sweet and lemonade, and at 6% ABV, easy to sip on a summer afternoon. Even so, I added Sipsmith gin to my tall glass with ice and an additional squeeze of lemon.

Breaking news: I much prefer gin to vodka in most tall drinks — most, but not all. The 7% ABV Fugu Vodka Mule employs copper can colors to evoke the mug the drink is traditionally served in. And the can does the drink no disservice — especially for ginger fans, as that’s the flavor that comes roaring through. A “splash of bitters” gives it a little more complexity.

Fancier packaging of pre-made cocktails in bottles doesn’t necessarily yield a better product. I tried two “naturally flavoured” Austin Cocktails, actually made in Kentucky. “Tastes like pancakes!” one taster said of the Fred’s Peppered Maple Blood Orange Bourbon Cocktail. Yes, it did. Although the pepper, brought into focus by an added squirt of lemon, helped balance the drink. AC’s New School Gin Mule didn’t have a syrup issue, but I’m not convinced that gin was the better choice than vodka here. And the lime tasted artificial to me, overwhelming the modest ginger component.

It’s also not necessarily the case that bottled classic cocktails should work better than a drink created expressly for bottling — but that’s what happened in this limited sampling. The On the Rocks Premium Cocktails collection comes in a corked bottle you might actually display, and the 35% ABV Knob Creek Old Fashioned would taste fine over a honking big cube, no improvements needed. OTR’s Larios Gin Aviation missed the classic mark due to subbing “natural flavors” for the usual crème de violette and Luxardo cherry liqueurs — and reducing the ABV to 20% as a consequence. Adding lemon changed the slightly cloying “natural” violet aspect immensely. Moral: keep lemons on hand.

Occupying an in-between ground is the Bloody Buddy Bloody Mary with Vodka. Packaged in a four-pack of 200-militer plastic bottles and made in Dripping Springs, it needs only a celery stick and some ice to be a more than perfectly respectable brunch-into-lazy afternoon companion. Or just shake it up and drink straight from the chilled bottle. We don’t judge.

Note: Cocktails were sourced from Total Wine, Twin and Spec’s liquors, none of which will have all the mentioned products.