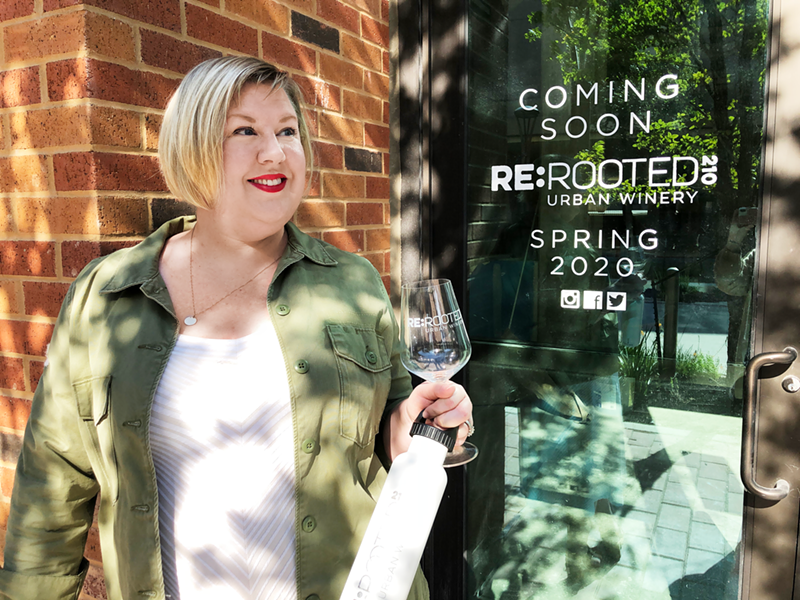 For as long as Jennifer Beckmann can remember, Texas wine tastings generally involved one of two scenarios: straight-backed waiters pouring it in a dining room full of haughty guests or tipsy thirtysomethings posing for selfies with glasses of rosé.

The sommelier wants to break Texas wine free from high-dollar restaurant tastings and bachelorette weekends, and that’s why she’s opening ReRooted 210, San Antonio’s first-ever urban winery. The site, in the works since 2017, will open for business next month.

“After 11 years in the industry, one of the things I’ve found was that anywhere that was Texas wine-focused, I didn’t really want to be,” Beckmann said. “I was finding these places that felt like a great spot for my grandparents to hang out. So, we’re taking this incredibly rural story of winemaking out of the Texas Hill Country, and giving it an urban feeling, a place to re-root itself — which explains part of the name.”

The industrial-modern design of the 2,200-square-foot space at Hemisfair’s ’68 Apartments will reflect the vibe of her target clientele: casual and stylish, with a little bit of funky attitude. Featuring high ceilings and concrete floors, it will be — in Beckmann’s own words — somewhere she and her friends will “want to hang out and enjoy some kickass wine.”

The urban attitude isn’t exclusive to the design of the space. Beckmann turned to renowned Chicago-based artist Tony Fitzpatrick for label images for ReRooted 210’s in-house wine, produced by Fredericksburg’s Slate Mill Collective. The strong lines, bold colors and thought-provoking imagery are a far cry from the labels of most Texas wines on grocery shelves.

“We’re hearing this younger voice of growers and producers, but not seeing that representation in the market,” Beckmann said. “You’re still seeing these old spurs and cowboy boots and longhorns on the labels, and as a wine professional, I feel that’s created this idea that Texas wine is a cartoon of itself, a postcard. And we have more to offer.”

Meant to be enjoyed

In terms of offerings, ReRooted 210’s inaugural lineup will include seven wines on tap: two white, one rosé and four red. The process of offering wine via keg rather than bottles was an environmental — and cultural — decision.

“It’ll be like a filling station in Europe where people come to fill up a growler of everyday drinking wine,” Beckmann said. “We want to encourage people to take this wine home and drink it. That’s what it’s for. Then come back every few days and get a refill. … Wine should be fun; it should be enjoyed.”

Alongside the in-house brand of draft and bottled wine, ReRooted 210 will offer an array of wines from around the state. Beckmann says she wants to shine a spotlight on vintners making world-class product while offering a different marketing and identity perspective on Texas wine.

“There are many good things that are continuing to evolve right in our backyard, but not enough champions with a platform to reach more people,” said Scott Ota, High Street’s general manager and wine director. “I’m happy for [Beckmann] to finally have her own place where she can preach the good word on Texas wines. Rising tides raise all ships.”

With plans to open “by hook or by crook” by November’s end, Beckmann says she’s excited about the walkability the newly redeveloped Hemisfair complex and its open-container rule.

ReRooted 210 will share a patio space with recently opened Lick Ice Cream, and recent leases signed by Bombay Bicycle Club and Box Street Social should add to Hemisfair’s appeal as a culinary destination.

Beckmann says her goal for the winery is to provide an environment for those interested in wine to dabble without the pressures often associated with formal tastings, where terms like “terroir,” “tannins” and “typicity” can leave novices scratching their heads.

“San Antonio has this outgoing, really adventuresome ideology around eating and drinking. People are open to it, it’s just that maybe they’re not always the most versed,” she said. “It doesn’t have to be about the grape or the label, it’s about finding what you enjoy. If, at the end of the day, you’re not walking away feeling like you know how to fit wine into your life in a more seamless way, I’m failing. Miserably.”