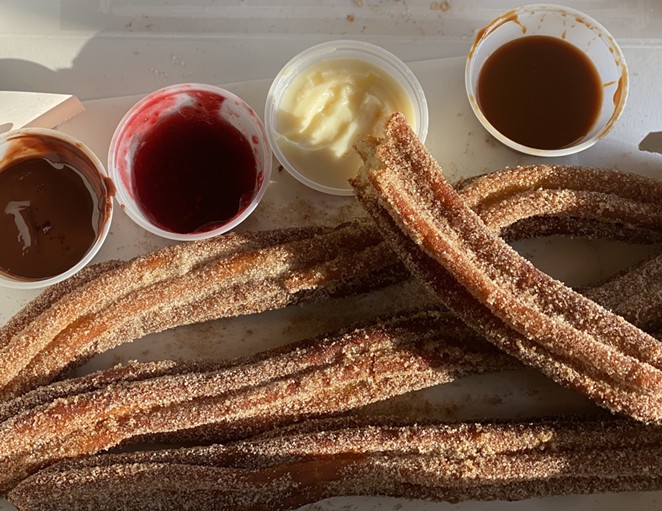 It’s tempting to think of churros as simply another form of Fiesta-fueled fried dough on the order of the infamous funnel cake — only with sexy ridges and a Spanish accent.


But in Spain, where the sugary treats have been around for centuries, they’re a cherished tradition — one that was inevitably exported to other countries during that kingdom’s colonial expansion.

When chocolate made the return trip from New World to Old, a new tradition was born: the celestial pairing of churros and chocolate. At Madrid’s venerable Chocolateria San Ginés, it’s steaming cups of thick and dark chocolate first, with churros as an obligatory accessory — obligatory to the tune of 80,000 to 90,000 served per year in pre-pandemic times.

In Spain’s equivalent of the county fair, churros are most often served solo, and that’s generally the way they’re found in San Antonio — with one prominent exception. The newly opened I Love Churros shop on Bandera Road offers a version of Mexican hot chocolate made from Abuelita tablets and topped with enthusiastically torched pink-and-white marshmallows, which match the shop’s perky décor. It’s no match for the viscous and volcanic Spanish equivalent, but it’s a game try.

In San Antonio, the chocolate part of the equation is now most often represented by its availability as one of several dipping sauces that also might include Nutella, cajeta and the strangely popular condensed milk. These and more, including a surprisingly appealing raspberry purée, are available at ILC. There’s even a tart key-lime-pie version that would be a perfect antidote to fried heaviness, assuming the long churros, as fluted and twisted as a Baroque column, were the least bit greasy. However, judiciously sugar- and cinnamon-coated and tender inside, they’re not. There are also mini churritos, which are good for eating on the run. And there’s even a frozen version that complements a selection of gelatos.

At Honchos — The House of Churros on Broadway in Alamo Heights you’ll also find mini and frozen churros. An intriguing chocolate-dough churro is teased online but not available on the menu board. The large classic version is piped out with a hole inside, sort of like a super bucatini. That hole can accommodate any of the eatery’s dipping sauces, which include peanut butter and cream cheese.  Just so you’re not disappointed, know that the filling doesn’t occupy the center completely, so I’d go instead for the dips to increase the contrasting flavor. And I’d also check out the uniquely formed lasso churro, maybe in its mini form served hot and tucked like a tiara onto a cup of vanilla ice cream. According to Honchos, it also serves up cinnamon-spiked hot chocolate on the weekends.

The closest to a county-fair, carnival-midway churro experience is likely at Churro Star’s cart on Produce Row. Tourist trash is all around, and the vat of bubbling fat demands attention. Churro Star also operates a food truck at Nacogdoches Road and Loop 410 with a more varied menu.

Despite the downscale setting, Churro Star’s slender, ridged batons are golden, sugary and crunchy — qualities we all secretly desire, admit it or not. The four pack comes in a white paper bag that quickly becomes grease-spotted, but no matter, it’s perfect for walking around. And as I discovered when reaching home, the churros were still passably warm, and if you order an extra sauce — one comes with the order — you can double-dip with impunity. First in Nutella, then in chocolate in my case. The takeout order offered all of the guilt and none of the carnival chaos.

Since, as far as I know, it’s not available in these parts, here’s a recipe for Spanish hot chocolate. Buy the best dark chocolate you can find (unsweetened or bittersweet) and sweeten to taste. Vanilla can go into the mix, too, but don’t omit the cornstarch — that’s what accomplishes the desirable dipping cling.

Roughly chop the chocolate. Pour the milk into a medium saucepan and add the cornstarch, whisking to dissolve it completely. Add the sugar and whisk some more. Put the saucepan over medium heat until it just starts to boil, stirring frequently. Immediately remove from heat. Add the chocolate to the saucepan and stir until completely melted. Taste for sweetness and spice and adjust if necessary. Ladle into  mugs.