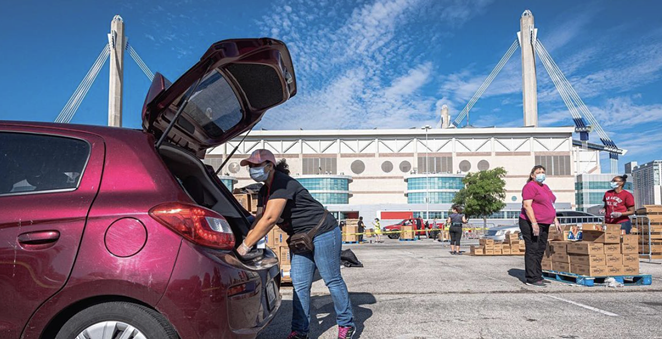 Last month’s record-setting freeze has added insult to injury for Texas food banks, as many brace for produce shortages from devastated farms and groves, CNN reports.

The 21 food banks in Texas saw an increase in food assistance needs since last March as a direct result of the COVID-19 panic, but last month’s cold snap eviscerated entire crops in the Rio Grande Valley and the Winter Garden area north of Laredo, according to CNN.

Produce wasn’t the only casualty, however. According to Texas Agriculture Commissioner Sid Miller, millions of gallons of milk were dumped due to lack of power and natural gas at processing plants, and poultry farmers endured massive losses due to lack of energy needed to heat incubators and facilities.

While non-perishable staples and pantry items represent a large amount of the food available at Texas food banks, the goal is to make fresh fruits and vegetables at least half of all the food that is being put out in the community, Celia Cole, CEO of Feeding Texas, told CNN.

Feeding Texas is a nonprofit organization that coordinates the 21 food banks in the state.

With surpluses of produce running low, food banks would have to reach outside of Texas to supplement the supply — which would include increased costs of produce from out-of-state growers, plus the cost of freight.

"We would have to stretch our limited dollars a lot further," Cole said.

Eric Cooper, president and CEO of the San Antonio Food Bank, told CNN he’d already received phone calls from several growers who don't believe they will be able to donate produce this year due to product lost to the freezing temps.

"There will be another season coming, but what do you do today?" Cooper said. "What can we do to put food on the table now?"