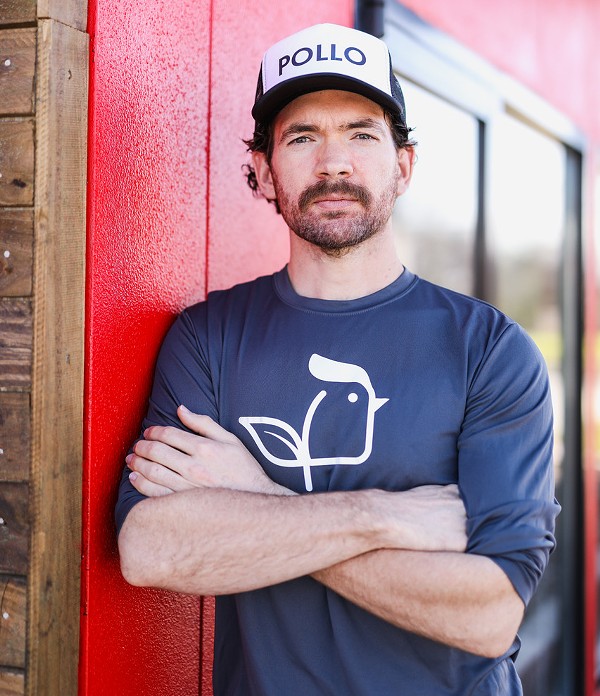 Project Pollo’s sandwiches aren’t the only thing on a roll. In less than a year, the vegan chick’n outfit has opened five locations, with a goal to open 100 by 2025.

The rapid-fire nature of the fledgling chain’s growth would even be impressive for a startup that isn’t vegan.

To find out how Project Pollo’s making it happen, we spoke with Bradbury about scaling up, treating workers right and the chain’s People Project sandwiches — pay-what-you sandos of delectable breaded chik’n slathered with house aioli and dill pickles.

Have you had any restaurant experience before Project Pollo?

I’ve actually been in the restaurant space forever. I grew up in Kansas, on a farm, actually raising chickens and cattle, so that irony is always funny to me. Eventually, I worked some high-level executive positions, including being a regional director that oversaw foodservice operations for several franchises such as Which Which, Dunkin Donuts, Hunt Brothers Pizza, Pizza Hut. My wife’s family is from Texas, so we decided to move here, and I was set up to take an executive position with the leadership team at Wing Stop, but being vegetarian, something about that job just didn’t feel quite right. It made sense then to move on to something that was closer to what I believe in.

Would you say that previous experience helps with these plans to scale Project Pollo up so aggressively?

In terms of scaling, absolutely. I’ve been in that role, so I understand the infrastructures and systems needed in order to replicate and to do this quickly. I would say the foundation and really robust trainings I went through for all of those companies really helped me understand a lot. Obviously, by implementing it all back in the Midwest, I have real world experience in making things happen, going from zero to 100. When it comes to systems, infrastructure, scaling, yeah, those skills are essential, but more importantly, I’ve seen how great companies treat people. Once you see that, you always strive for it.

Can you speak more about that?

One of the biggest challenges that I’ve always seen in this industry is the idea that you should pay people a low wage because you have a high turnover rate. Honestly, people deserve better. We built our model around putting people first in all capacities, so that we can help ensure that they’re not hitting as many financial obstacles outside of work. We give our employees every opportunity to make more money, as long as they want to learn. Project Pollo isn’t something that’s going to make me rich. People are always like, “You must be making a killing,” and they’re surprised when I say, “No, actually, I’m not.” You see a lot of restaurateurs making a lot of money, sure, but I want the people working alongside me to make money too. Because without them, I’m lost. It sounds cliché, but we don’t need to pay someone $8 so that I can make $200 an hour. The longer people stay with us, the better it is for them and for us, so why not invest up front? We [could] spend hundreds of thousands of dollars within the next two years at the industry average turnover rate — or we could just pay people what they’re worth.

Let’s talk about the Free People Projects, because you just did a huge companywide giveaway of hundreds of them.

The People Project was the original foundation for what I wanted Project Pollo to be. I’ve been vegan for four years and vegetarian for six, and what I was seeing in the market was becoming really unattractive to me. I had friends and family that were trying to eat a more plant-based diet, and they would complain all the time that they couldn’t afford to do it. So, with the People Project, we created a pay-what-you-can item to provide affordable access to plant-based alternatives at any cost. We recommend folks pay $5.50 per sandwich, and what that does is it pays for you plus two. It pays for your sandwich, and then we reserve two in what’s essentially a bank to feed people in need. Though we consistently see people come through that are in need, we’ve ended up kind of building this surplus of a shit-ton of sandwiches that we want to give away, so that’s where the company-wide giveaway comes into play.

I have to ask. You’ve shared a fairly aggressive expansion plan, which likely requires a lot of capital. How are you financing that?

Where does the money come from? Well, when I decided to do Project Pollo, I made the decision to sell our house. That helped us set our foundation for the first two locations, starting with the food truck at Roadmap Brewing and the location in Austin. Fortunately, those two have generated enough revenue for us to expand to six. So, as long as we’re cashflow positive along the way, we won’t see any issues being able to expand off of that cash flow. I’m talking to some banks right now so that we can work more quickly to expand than we would by relying 100% on cash flow, and we’ll probably end up raising some money and taking on some investment down the road. But at this point, I think that as long as we’re doing right by our people and our community, we will always have a place to grow our brand.