The campaign for Texas lawmakers to strike down the state's ban on Sunday liquor sales just got a new injection of fuel: the support of NASCAR driver Sam Hunt.

When Sam Hunt Racing's No. 26 Toyota Supra competes in Austin's NASCAR Xfinity Series Pit Boss 250 at later this month, the car will carry a sponsored message urging Texas to “Boot the Ban." 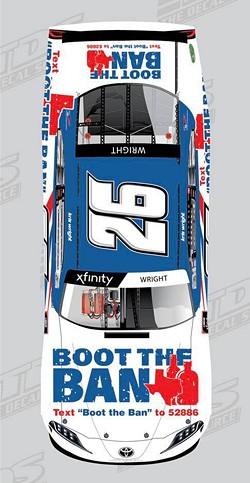 Since 2002, 21 states have passed laws permitting seven-day liquor sales, bringing the total number of states to rid themselves of the Prohibition-era bans to 43.

“Texas is a free-market state, but antiquated ‘blue laws’ on distilled spirits sales that forbid consumers and businesses from making their own choices threaten that freedom,” said Chris Swonger, president and CEO of the Distilled Spirits Council of the United States (DISCUS), in a release. “Beer and wine are already sold seven days a week, and Texans like myself overwhelmingly support allowing spirits to be sold seven days a week as well.”

As part of its partnership with DISCUS, Sam Hunt Racing — helmed by 27-year-old racer and business owner Hunt — also will make a public service announcement to raise awareness about impaired driving and encourage responsible drinking decisions.

To get involved in the “Boot the Ban” campaign, fans can visit the website, which hosts a pre-written email asking Texas legislators to end the prohibition on Sunday liquor sales.

The Pit Boss 250 will be televised on FOX Sports 1 at 3 p.m. on Saturday, May 22. Driver Kris Wright will take the wheel of the "Boot the Ban" car for Sam Hunt Racing.