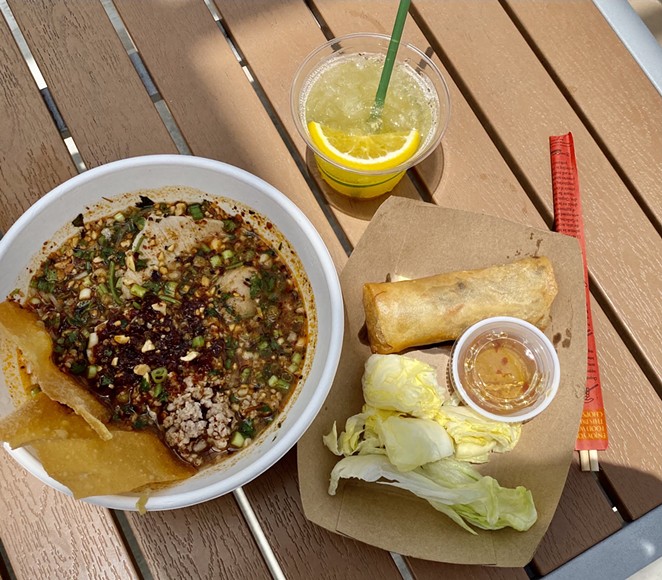 If your idea of paradise encompasses Astro Turf, photo booths and gaming consoles housed in shipping containers, then do I have a vacation destination for you.

Hello Paradise, yet another project by Jeret Peña’s Boulevardier Group, is a lightly reworked makeover of the former Shuck Shack on Grayson Street, itself the product of fellow serial hospitality entrepreneur Jason Dady. If the new spot seems kinda washed up on the beach — the games, I suspect, were salvaged from Still Golden, a nearby Peña bar demolished last year to make way for downtown development — then know this: the Thai food and tropical drinks are anything but flotsam and jetsam.

It could be pandemic-emergence syndrome, but I find myself stunned by small things lately, and the menu’s tom yum noodles are a prime example. Think the classic Thai soup, add springy rice noodles, the sprightliness of lime, lemongrass and chili flavors and some briny fish sauce for umami. Add three types of pork in place of the soup’s usual shrimp, and you have a package that touches all of Thai cuisine’s sparkling high notes.

That the pork appears in sliced, ground and ball form isn’t just the kitchen showing off: the differing textures, further augmented by the crunch of chopped peanuts, add complexity to an already sophisticated dish.

If the tom yum noodles exemplify Thai food’s bright and light character, then the beefy boat noodle soup stands in for its deeper, more contemplative side. I consumed this one more slowly, all the better to appreciate the warmer spices such as star anise and cinnamon, the depth provided by black soy balanced by a perceived touch of sugar, and, yes, the earthy, metallic aspect contributed by a splash of bovine blood. As in the tom yum, there are three forms of the signature meat, one of which, I suspect, is beef heart. Contrast is supplied by what I also imagine to be water spinach and a sprinkling of cilantro. The menu mentioned pork rinds, but they were absent in the dish I got.

Panang and green curries are ubiquitous on local Thai menus, but Hello Paradise’s green curry holds up well in comparison. There’s ample sliced chicken, lots of tiny globe eggplants and a broth based on mellow coconut bumped up with green curry paste and Thai basil. Everything is further enlivened with the occasional, contrasting flash and burn of red Thai chilies.

Pork balls also appear in the restaurant’s snacks and small plates category, but in an entirely different fashion: coarsely ground, deftly seasoned with sesame oil and pepper, encased in tender dumpling wrappers and sprinkled with toasty garlic. The side sauce is black soy with molasses-like undertones, and the two go together like Ricky and Lucy. However, to me, syrupy sauce ruins what the menu touted as the “best damn spring rolls.” Nothing wrong with the filling of glass noodle, cabbage, mushroom and carrot, and the wrapper is an exemplary crisp-tender. Just hold the pancake topping.

Hello Paradise’s Lunch Special #1 — may there be others in the future? — initially consisted of Panang curry, tom yum noodles or Thai wings paired with a single spring roll. With a wing shortage now on, the kitchen has substituted thighs. “They’re done the same way and there’s more meat, so it’s an even better deal,” the order taker promised.

The Boulevardier boys do know their way around a cocktail — even if it’s frozen. So, if you’ve made peace with the spot’s Astro Turf, you can feel safe ordering an $8 slushy daiquiri. I liked the one accessorized with spicy cucumber. A more creative-sounding Pero No Sé with tequila, mango, lemon and falernum — a tiki component with an almond base — runs $10. High Wheel and Roadmap supply two local beers.

If you’re looking to experience Hello Paradise, my recommendation is to go as sunset approaches, grab your drinks of choice and hope there’s either a DJ in attendance or a movie showing on the flanking wall. That way your suspension of disbelief has a good chance of succeeding.

The skinny: Jeret Peña’s prolific Boulevardier Group took over Jason Dady’s Shuck Shack and turned the mostly outdoor venue into Hello Paradise, offering a Thai food kitchen and drinks tending toward tiki. The menu includes exceptional offerings such as pork-filled dumplings, tom yum noodles and boat noodle soup. Cocktails are equally accomplished, with drinks such as the Pero No Sé with tequila, mango and falernum standing out. Even the frozen daiquiris are worth investigating.