Yeah, we don’t get it either.

Then again, this is the same casual-dining chain that launched a stupid-ass bread bowl glove back in January. So, maybe none of us should be surprised.

The new collection, described on Michigan-based Panera’s TikTok account as “SOUP-er” — get it? — includes two one-piece women's suits and two sets of patterned trunks. One fabric design sports a pattern of broccoli and cheese on a turquoise background, while the other is emblazoned with the word “soup” in all capital letters and the brand’s logo in its signature green and yellow hues.

If you're with us this far, you may be thrilled to learn the pièce de résistance of the collection is a circular pool float in the shape of Panera’s famous bread bowl. (See, they aren't just for keeping your hands — or soup — warm!)

The preposterous piece of poolside merch likely wouldn’t stand up to a float down the Guadalupe River, but who knows, some fan of the ubiquitous casual-dining chain may want it as they float away the summer in their backyard. 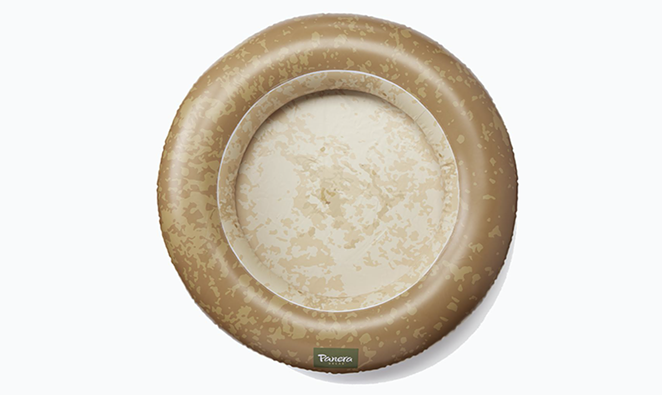 Which brings us to the bad news for Panera die-hards: the swimming gear sold out quickly after the launch. Even so, much like the above-mentioned bread glove, the collection is simply too fucked up not to share.