In its fourth season on A&E, Flip This House features a diverse cast of characters on renovation teams from New Haven, Atlanta, Los Angeles, and San Antonio. Leading the San Antonio team is Armando Montelongo , who works alongside his wife Veronica, general contractor Randy, and project manager Brent. 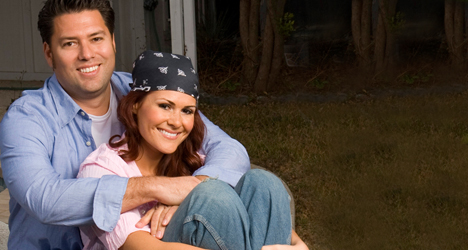 During an interview with me, Montelongo talked about the moment he knew he had change his life and do something to support his family and why his Flip This House portions of the show are the most interesting of the four.

How did you try to make money before getting into the real estate game?

I'm one of those guys who tried everything. I tried selling cars. I sucked at it. I was too honest. I remember a guy came up to me and asked, “Armando, can I get this car cheaper somewhere else?” And I said, “Probably.” My sales manager saw me and fired me. I kept trying other things, but at the time I couldn't even get hired by a pizza delivery service.

When did you realize you had to change your life?

Well, we were foreclosed on. We had to move into my in-laws' garage in California. We were living on food stamps. I remember looking at my son, who was only two and a half at the time, and thinking, “One day, this kid is going to know whether daddy is a winner or a loser. I have to do something.” So, I moved my family back to San Antonio in August 2001. We literally rolled into town on our last tank of gas. My wife sold her furniture for food.

Is that when you decided to get into the real estate game?

Well, in 2001 there was this mold scare in San Antonio and real estate depreciated by 40 percent over night. I went in and bought some of the mold properties for pennies on the dollar, fixed them up, remediated them, and sold them under market value and started making millions of dollars doing it. From there I was hooked on real estate. Some people say, “I don't know if I want to be hooked on real estate.” I tell them, “After you get that first check you will definitely be very hooked.”

How did you buy your first property if you were struggling financially?

The No. 1 thing about real estate is that you have to have a mentor — someone to teach you how to do it. So, I went out there and got a really good deal on a mold property for $36,000, which was worth $125,000 in good condition. I needed about $25,000 to fix it up and I didn't have any money to do it. So, I went out there and convinced an attorney in town that I didn't know that this was a good deal. So, this attorney lent me the money. I split the profits with him and I was up and running. I found what we call a private money investor. Some people call it OPM — Other People's Money. From there, I started building an empire with him.

You talk about “good debit” and “bad debt.” Do you think San Antonians understand the difference between the two?

I love San Antonio, but San Antonio seems to be very uneducated as far as the difference between good debt and bad debt over spending. The nice thing is San Antonians don't overspend as much as people in other parts of the country. They actually keep their lifestyles relatively modest compared to other people.

Can you teach anyone about how to make money in real estate or is there a secret genetic makeup one needs to be successful?

(Laughs) That's the question everybody asks. Do I have the magic inside me to do it? The answer is yes. I can teach anybody how to do this if they know basic sixth grade math. If you don't know basic sixth grade math, then I can't help you. I have a woman by the name of Abigail I've been working with. She has eight kids. She is 32 year old. She is a full-time nurse. She is a busy person. I went out and showed her how to do some real estate deals. She went out and made $110,000 in eight months and then $140,000 in the next eight months. She made a quarter of a million dollars in 16 months.

Do you ever think the entertainment side of real estate is getting a little diluted because of all the shows that revolve around things like home repair and flipping houses?

I don't know about the rest of Flip this House, but I know that my show definitely has its place. I think the other characters are relatively uninteresting on Flip this House. I think they are really nice people, but for entertainment value Flip this House in San Antonio, bar none, cannot be competed with. When it comes to things like HGTV, you have a lot of people on there trying to make putting wallpaper up interesting. Putting wallpaper up and watching paint dry is not interesting. Putting another nail in the wall is uninteresting. What's interesting is if you're going to make money on a deal or not. If I lay it all on the line, what's going to happen? There will be many who try to copy it, but I don't think anyone can duplicate it.

Are you comfortable with the term “reality show” to describe Flip This House or would you rather be referred to as more of a real-estate-type show?

Honestly, I don't really care. A&E calls it a docudrama. I really don't know what that means either. Look, were not in Jacuzzis trying to get 15 girls to make out with us. We're there to show our business. If they call that reality, that's great. If they want to call it wealth making, that's great. I originally did this show so I could show my grandkids one day and say, “Hey, look, you're crazy-ass grandfather was on television at one time.” Now I do it because it's a lot of fun. I don't think putting a label on it affects my own day-to-day reality whatsoever.