With his role as Fernando Sucre in the TV series Prison Break finally behind him, actor Amaury Nolasco, 38, is focusing all of his energy on his promising film career. 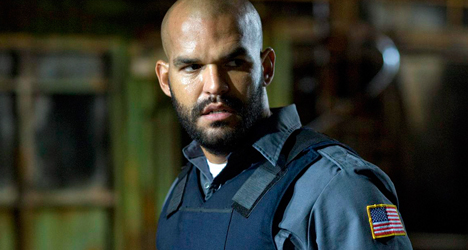 Nolasco, who is of Puerto Rican descent, has proven he can hold his own over the last five years with a number of roles in action movies, including 2 Fast 2 Furious, Street Kings and Transformers.

Now he can be seen in the action movie Armored, which stars Matt Dillon (Crash) and Laurence Fishburne (The Matrix). In the film, Nolasco plays Palmer, an armored truck security guard caught up in a $42-million heist with his coworkers.

Along with Armored, Nolasco just finished shooting The Rum Diary, a film adaptation of Hunter S. Thompson's novel of the same name.

During a phone interview with me, Nolasco talked about his roles in Armored and The Rum Diary, what he would consider the most sensitive thing about himself and what his “pact with the devil” has brought him in life.

It's the end of the year, which usually means films vying for Oscar attention make their way into theaters. Do you see Armored as a nice break from all the dramas that we'll see this month?

I'm actually proud that it's coming out in December because it's a really tough month. When they screen-tested Armored, ratings went through the roof so I think they are confident releasing it this month. It's award season, of course, and we're going to be getting these great movies and performances, but that's not for everybody. There's an audience out there that loves action-packed movies.

Tell us a bit about Palmer and what drew you to him as a character.

What drew me was how dark he is. He doesn't say much, but his presence is there. He's a guy that has had his encounters with the law and has spent his time in jail. He came out and found God and religion, but somehow finds himself with this proposition to steal $42 million and get away with it. It's a dog-eat-dog movie where you see a lot of backstabbing and people picking sides.

We see you in a lot of manly roles in TV and film. What would you say is the most sensitive thing about you?

That's a very good question. What am I sensitive about? I love kids — especially kids with disabilities. I haven't had a chance to explore a role where I can show my sensitive side. Right now I am getting these manly roles, and you take those until other opportunities come up. Hopefully soon I can show a different range. I actually just finished a movie `The Rum Diary` with Johnny Depp. It's a completely different movie `from what` I'm used to.

Tell us about your character in Rum Diary.

I play a guy named Segurra. He's a suck-up who has money and is basically a shark. He's one of those guys you don't want next to you because he'll suck your blood out.

Was this the first time you shot a film in your home country of Puerto Rico?

Yes, it was a beautiful experience. I left Puerto Rico 14 years ago to start a dream. To come back as a prodigal son with a movie of that caliber really gave me pride. The whole country embraced me. I was in the newspapers everyday next to Johnny Depp. (Laughs) That's not a bad name to be mentioned with.

Your birthday is in a couple of weeks; you'll turn 39 and then there will be one more year until the big 40. Is 40 a scary number for you or is it just another year?

(Laughs) Yeah, I got a whole year to think about it. If you were to ask me this question 20 years ago, I would have freaked out. At 20, I was thinking, in the next decade I'm going to have to get married and do all this stuff. But now, I'm not married, but I am in a serious relationship. I still have a lot of things I want to do and places I want to see. So, it's all just an age. I still feel very young at heart. I don't look my age because I have a pact with the devil. Life is how you live it. I try to live mine to the fullest.