In the film adaptation of the 80s TV show The A-Team, Cuban actor Yul Vazquez plays Gen. Javier Tuco, a character he describes as “off his rocker.”

Vazquez, who started his career playing a band member in the 1992 film The Mambo Kings, has starred in a number of movies and TV shows including Runaway Bride, Traffic, American Gangster, and TV's Seinfeld.

During our interview, Vazquez talked about working with director Joe Carnahan, why he is not in favor of censorship in movies, and what he thinks about Mr. T recently stating that he thought the new A-Team was too violent. 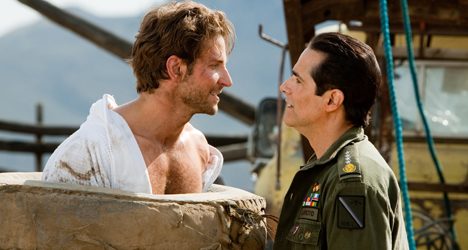 What was it about the role of Gen. Javier Tuco in The A-Team that made you want to take it on?

I don't think I've ever played a guy who is so unhinged. That's always attractive to an actor because it automatically gives you a tremendous amount of freedom. I didn't know what `director` Joe `Carnahan` wanted me to do. I was pleasantly surprised when he very generously allowed all the actors to freely explore what they wanted to explore without real restrictions. I think he got amazing performances because he encouraged and allowed that. His hand is all over this film. I can't stress that enough.

What in Joe's past work have you seen that put him on the list of directors you'd like to work with? I'm guessing Narc, which is my personal favorite of his.

I had seen Narc. It was a tremendous and revolutionary film. I had seen Smokin' Aces. I was already a fan of Joe's work. Working with Joe is like working with your best buddy. He is so excited to be making a movie. He's blasting AC/DC on the set. The only thing that was missing was tequila.

The violence in The A-Team plays a big role in the film. Can you talk to me about how you view violence in the entertainment industry? I ask this because I know you've done voice work for video games like Grand Theft Auto and other films like Bad Boys 2, where the violence was pretty heavy.

(Laughs) You think? We're going to get into a tricky area with this because I personally am not an advocate of any type of censorship. I'm not a role model. I say parents should parent and monitor their kids. When I was a child it was very clear what I was allowed to see and what I was not allowed to see and there was no discussion or option or negotiation. Whatever my mom said, that's what went down. I think anything that is gratuitous is not good, but it's fine if it's warranted and justified and moves the story forward whether it's violence or sexual situations.

I completely agree with you on that, but let's talk about some of the people who don't. One of them is original TV star of the A-Team Mr. T, who came out recently chastising the violence of the new film. What do you think about that criticism from someone who I'm sure everyone involved in the new film wanted the support of?

Your fellow cast member and UFC fighter Quinton “Rampage” Jackson came out and said the entire profession of acting “makes you soft.” Do you agree with that sentiment?

I spent some time with that guy and — he probably wouldn't want me to say this — he's one of the nicest guys you'll ever meet. There's nothing scary about that dude when you're sitting next to him. He's a sweetheart. (Laughs) I mean, he's a very powerful and strong fighter, but he's a really lovely guy.

Ah, so he was already soft when he got on set?

Yeah, he was already a nice guy when he got here. He just happened to be a great fighter. Here's what I have to say about acting: it's for the brave, period.

Well, you know Quinton lost his most recent fight, right? He said the reason he lost was because he was focused on The A-Team and didn't have time to train.

You know, this might shock you, but I don't follow any sports. I didn't even know he had a fight.

Were you a fan of the original TV show?

Are there any other TV shows you grew up with that you might like to see get their own film adaptations?

Would you like to go back and reprise your role again? (Vazquez was in three episodes of Seinfeld between 1995-1998. He played a character named Bob. Many fans will remember Bob as the Puerto Rican who becomes angry when he finds out Kramer refuses to wear an AIDS ribbon during an AIDS march).

Oh, absolutely. I love those guys. That's some of the best TV writing that was ever created. That show was gold.

Do you still get recognized for that role?

I do. Television casts a very wide net. That show is everywhere. It's dubbed in German and whatnot. You could go to Estonia and there's probably an episode of Seinfeld playing there. Television is a very powerful thing.