In the new heist movie Takers, actor Jay Hernandez plays Eddie Hatcher, an LAPD officer who goes after a team of bank robbers alongside his edgy partner Jack Welles (Matt Dillon). During the heist, Eddie is faced with a situation concerning his son that compromises his position as a cop. 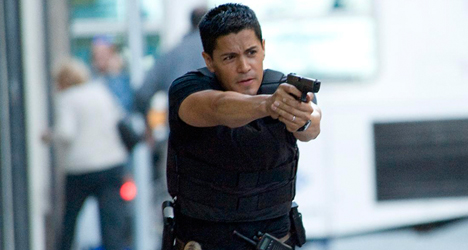 During an interview with me, Hernandez, 32, whose film credits include Friday Night Lights, Nothing Like the Holidays, and the Hostel franchise, talked about why playing a cop isn't quite as fun as playing a criminal and why heist movies are as popular as ever.

Was there something particular you saw in your character that made you want to be a part of the film?

There are a lot of reasons why I wanted to be in the film, but one of the main ones was because the character was interesting and layered. Also, there was a very eclectic cast that would hopefully build tension.

Are these layered roles the type of work you're pursing at this point of your career?

I think most actors try to do stuff that is not one-dimensional. It ultimately comes down to what options actors have. If you don't have a lot of options, sometimes you're forced to do things you don't necessarily want to do. With me, I always try to pick things that are interesting.

You've played a cop before. How do you prepare for a role like this to make it completely different from the previous one?

You just try to switch it up in anyway possible and not repeat what you've done before. I have actually played a cop a couple of times. Maybe you can throw in a little accent. Physically there are things you can do. But this character had a lot of different things going on than the cop in Lakeview Terrace.

You played characters on both sides of the law, so which roles are more fun?

Playing the criminal is more fun. You get shoot more people and steal. The criminal always gets the girl.

Do you think in real life you might be able to pull off a heist without getting caught?

What do you think you'd be doing if you weren't an actor?

Honestly, I don't know. I've been doing it for a while now and I've accepted it as my world. If I was going to do anything else, I would imagine it would have to include a lot of traveling and experiencing different cultures. I don't know what kind of job would take me all over the world like that.

What do you think it is about the heist movie that keeps it so popular as a genre?

It's this idea that everybody has: If I could just get my hands on $1 million, what would I do with it? You can take that idea and put it in any setting around the world or in any situation. As a writer or director, the potential roads you could walk down are limitless. Everybody has that fantasy sometime in their lives — if I could just get my hands on some cash, legal or illegal. I think that's why `the genre` keeps coming back and is always relevant especially now in terms of the economy.

Your co-star T.I. was recently quoted as saying that he wants to win an Oscar before he turns 40. You've been in the industry for 10 years. Is it realistic for actors to set those kinds of goals for themselves?

Well, the only way you're ever going to reach a goal is if you set one. That doesn't mean he's going to do it, but I wouldn't say it was impossible. I would love to do it someday, but it's not as easy as it sounds. Does he have the ability to do it? Maybe. But will the opportunity present itself? There are so many factors that go into somebody winning an Oscar that you never know. I hope to win one someday and if `T.I.` commits to it, I hope he does, too.