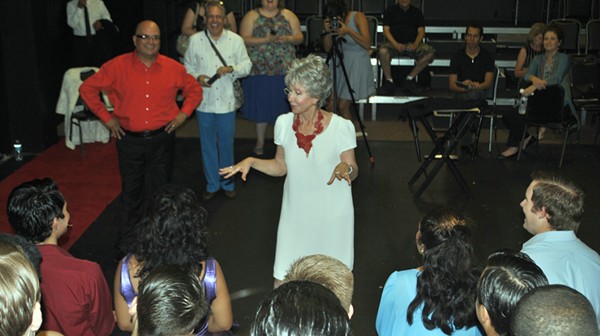 Legendary actress Rita Moreno sure knows how to fill an hour. During a Q&A event at the Woodlawn Theater yesterday to promote the theater’s new production of West Side Story, the Oscar, Tony, Golden Globe and two-time Emmy winner talked candidly about everything from her relationship with Marlon Brando (“He was the lust of my life”) to dating Elvis Presley (“He was no hound dog”).

She also did her best impersonation of Marilyn Monroe, read from her 2014 New York Times bestselling self-titled memoir and sang a few bars of a Spanish-language version of West Side Story’s “Somewhere,” a song on her new album Una Vez Mas debuting Sept. 25. The San Antonio Current caught up with Moreno, 83, after the invite-only confab down.

Have you seen any stage productions of West Side Story over the years that you consider the most memorable?

You know, I haven’t seen that many. I deliberately don’t see them. I know how it ends, for starters. I saw one in England once and I really hated it. But to be fair, it was very difficult for them to get that dance style right because it’s so American – Gene Kelly, Jerry Robbins. It’s just such a different vocabulary. When I was doing Sunset Boulevard [on Broadway], the girls in the show asked me to help them out. They all wanted to audition for West Side Story. It’s difficult to teach the (begins to clap and sing the syncopated rhythms of “America” from WSS). It’s just so against the grain. I just would rather not see it. Although I hear that I missed something wonderful with that young woman who won the Tony (actress Karen Olivo in the 2009 Broadway revival).

How would you feel if someone tried to remake the film?

I wouldn’t have any feelings about it. I heard [Steven] Spielberg wants to do it. (Editor’s note: Spielberg told Good Morning America a year ago that remaking WSS was something that was “on [his] mind.”) But I’ll tell you this: I have yet to see a remake work in movies, even when it has the best people. I don’t know why, but it doesn’t seem to ever work. I do love Spielberg, but I don’t know how he’d do with a musical. Just because he’s brilliant doesn't mean he can necessarily handle this kind of play.

Earlier this year you made a guest appearance on the acclaimed TV show Jane the Virgin. When you see an actress like Gina Rodriguez become as successful as she has, what does that tell you about how much things have changed for Latinas in the entertainment industry?

It tells me that we’ve come a long way, baby. It’s amazing that this wonderful and talented young woman made herself available and got a TV series. I am just so delighted and thrilled to pieces. She is a big fan of mine. I was on the show because she asked [producers] to bring me onto the show. It was really sweet and lovely. She’s a wondergirl, truly.

We recently interviewed 76-year-old actor Ian McKellen and he told us that he loves acting because it’s a job that you never have to retire from. Do you agree with that sentiment?

I love that! Oh, absolutely! I’m not planning to retire. I can see them bringing me out on a gurney or something. I’m still going to be roller-skating and trying to upstage somebody. I love what I do. Why would I want to retire? Unless, of course, memory [becomes an issue]. I know Judi Dench, who I adore, is having memory problems. It breaks my heart.

One of the Emmys you won was in 1977 for your guest appearance on The Muppet Show. The Muppets are coming back to TV next month on ABC. Would you jump at the chance for a reunion with 'Animal?'

Of course I would! I would love to work with the Muppets again! Who knows? Maybe we’ll have a chance to do it. I want to see how it is without Jim [Henson] at the helm, however. The Muppets were so much who he was. I gotta see it to believe it. I’m not trying to be cynical. It’s just that sometimes when things are that connected to one sensibility and one person, it’s awfully hard to make it work.