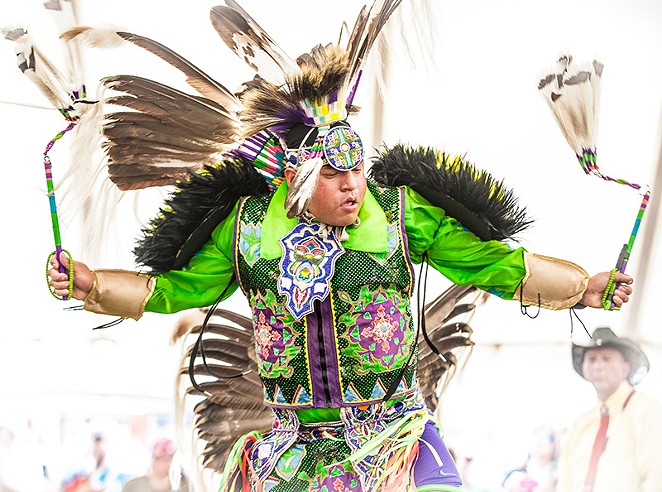 The Miakan-Garza tribe believes that the Spring Lake area in San Marcos is their creation site where they emerged from the underworld onto Mother Earth – and that’s where they hold their annual Sacred Springs Powwow. A powwow is a festival celebrating Native American culture with traditional dancers, singers, drum groups, arts, crafts and Native food booths.

This year the powwow is set for October 10 from 10 a.m. until 6 p.m., at the Meadows Center for Water and the Environment, 201 San Marcos Springs Drive, opening with a traditional Native blessing on the shores of the Sacred Springs and featuring a new Native Culture Tent.

“People are interested in learning more about Native American culture,” says Dr. Mario Garza, board of directors chair of Indigenous Cultures Institute, the powwow producers. “So we’re introducing educational presentations and performances that demonstrate our heritage.”

The Native Culture Tent will host storytellers like Grandmother Emma Ortega (Apache), Native American flute players such as Virgie Ravenhawk (Mohawk), presentations on the White Shaman Panel by the Institute’s Sacred Sites programs director Luis Aguilar (Coahuiltecan) who will also demonstrate ancient artifacts such as points, bows, atlatls and arrows. A special appearance by the Indigenous Arts Summer Camp students will highlight their camp’s grand finale performance – a salute to the four directions, danza Chichimeca, flute playing, and singing in a Native language.

The powwow is also bringing IronHorse to the main Arena Tent. IronHorse is a new drum-and-singers group from Apache, Oklahoma, performing in their southern style tradition. The northern style drum will be Texas-renowned Eagle Point Singers who are featured in every major powwow in the state. The Aztec drum will be from the Mitotiliztli Yaoyollohtli danza group, coming from Dallas, Texas.

“This year Cecil Gray will be returning as head man dancer,” says Maria Rocha, the Institute’s executive director. “He’s an outstanding performer and his wife Hauli Sioux will be our head lady dancer; she’s just amazing!”

Cecil Gray is Cheyenne/Kiowa and Hauli Sioux is Ponca/Tonkawa, both coming to San Marcos from Yukon, Oklahoma.

This year’s powwow promises a huge array of Native American culture, including arts, crafts, and Native food booths selling those famous fry-bread tacos. There will be a Youth Art Tent teaching children how to make an Aztec accordion-style book with their own stories. In its fifth year, the Sacred Springs Powwow is considered the most spiritually moving powwow in Texas, set along the shores of the sacred springs, and an event not to be missed.