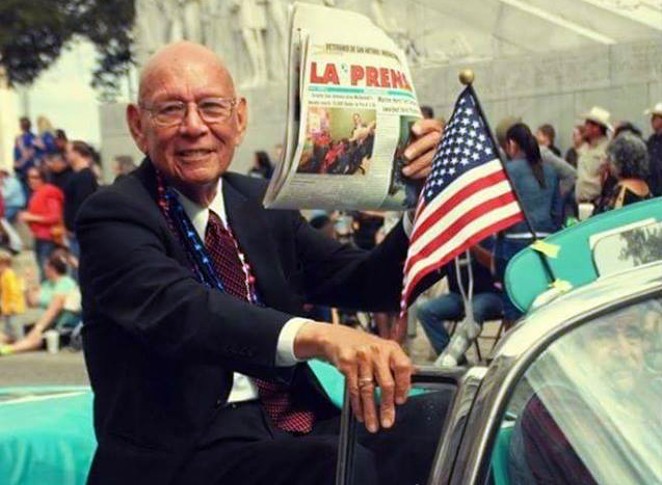 An icon in the newspaper industry has passed away. Florentino “Tino” Durán, former publisher and CEO of La Prensa Newspaper, a family-owned bilingual publication in San Antonio, died Sunday at his home after a four-year battle with Alzheimer’s disease. He was 82 years old.

“Our sweet, beautiful and loving daddy went to be with the Lord today,” wrote Nina Durán, his daughter and succeeding publisher at La Prensa, on her Facebook page. “He passed peacefully in his sleep with my mama by his side.”

Durán served four years in the U.S. Air Force after attending Lanier High School, where he was the school’s newspaper editor. After the military, he studied at San Antonio College where he wrote for the college newspaper. He earned his bachelor’s in political science and master’s in public administration from St. Mary’s University.

Over the years, Durán held a number of positions, including executive assistant to the Lyndon B. Johnson Administration, executive director of the Bexar County Housing Authority, president of the National Association of Hispanic Publications and executive vice-president of the San Antonio Hispanic Chamber of Commerce.

In 1989, after stints as the general manager of the Spanish-language newspaper El Sol de Tejas in Dallas and the president and CEO of El Informador Hispano in Fort Worth, Durán and his wife Amelia (“Mille”) took ownership of La Prensa, which had started as a Spanish-language publication in 1913.

Since then, La Prensa has been a cornerstone in the community, focusing on admittedly positive stories about Latinos in San Antonio and across the nation. The bilingual newspaper has also been an outlet where young, aspiring journalists have come to cut their teeth in the industry.

I was a wide-eyed, 22-year-old (non-bilingual) journalism major at Our Lady of the Lake University the first time I walked into the offices of La Prensa in May 2002 to start what I thought would be a quick and easy summer internship. I would have probably been happy making copies and fact checking articles, but my role at the publication quickly grew before I knew what was being asked of me.

After two weeks, the Duráns had put me on the payroll as a general assignments reporter and I found myself walking to City Hall to interview council members about water issues and economic development and street improvement ordinances. I was writing stories about local government, education, health, sports, nonprofit organizations, entertainment and everything in between. I was thrown into the deep end of the pool, and I only knew how to dog paddle. And I loved it.

Durán gave me my first opportunity to write as a professional journalist, and for that I can’t thank him enough. I worked as a full-time reporter and entertainment editor at La Prensa for five years (2002-2007). The position put me on a path to find myself as a writer and journalist and learn what I was passionate about.

I know my former colleagues feel the same way. One of them is Francisco Vara-Orta, who worked as a reporter at La Prensa from 2001-2005, and is currently a data specialist/staff writer at Education Week, a nonprofit news outlet based in the D.C. metro area.

“I will always remember Mr. Durán’s devotion to making sure that underrepresented voices in San Antonio had a chance to be heard, his savviness as a publisher and his sense of humor and wit as a man,” Vara-Orta said. “He was old school, but in many ways ahead of his time in seeing the need for a bilingual paper for a community of Latinos that had acculturated and lost some of their Spanish-language roots. For me, the opportunities La Prensa provided were immeasurable.”

Lea Thompson, communications associate at the LiftFund, remembers Durán as a generous man. She, too, started her journalism and communications career by gaining experience as a reporter at La Prensa from 2014-2015.

"Mr. Duran exemplified pride and respect for San Antonio's Latino culture,” Thompson said. “No story or individual was ever too small. I am forever grateful to him and the Durán family for giving me my first real reporting job, and for encouraging me to develop a voice for our community.”

Natalie Bobadilla, publications editor at Harlandale Independent School District, worked at La Prensa as a reporter from 2013-2015. She said
Durán’s positive nature and love for the community was contagious.

"I'll always carry Mr. Durán's teachings and inspirational words with me," Bobadilla said. "I got my start in the media industry because of Mr. Durán, and I will always be thankful for that opportunity. He had a way of seeing the best in people and encouraging them to reach their full potential. He was a constant ray of light to anyone that knew him."