(photo courtesy of Ramón Hernández) Salomé Gutiérrez A songwriter and recording entrepreneur who recorded many of the greats in his small home studio. Flaco Jiménez, Salvador García, Eddie "Lalo" Torres, and Toby Torres are a few of the legends he worked with. Gutiérrez is also the owner of San Antonio Music Publishing and Del Bravo Records.

Juanita "Janie" Esparza Owner of Janie's Record Shop. She's been promoting conjunto/tejano music at her shop for more than 30 years. Adán and Alfredo de la Rosa The brothers of Tony De la Rosa, one of the most popular figures and stylists in the history of conjunto music. Adan was Tony's long time bajo sexto player and second voice. Alfredo is also an accordionist and vocalist who performed for many years with Los Hermanos de la Rosa. 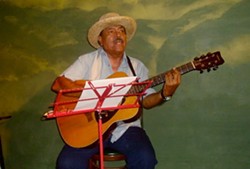 Abelardo "Chacha" Jiménez Considered one of the best vocalists in the history of conjunto/tejano music, Jiménez sang with El Conjunto Bernal, his own band Los Chachos, and Oscar Hernández and the Tuff Band.

Bernardo Martínez The bandleader, vocalist, and bajo sexto player from Laredo's Bernardo y sus Compadres has been performing for over 45 years.