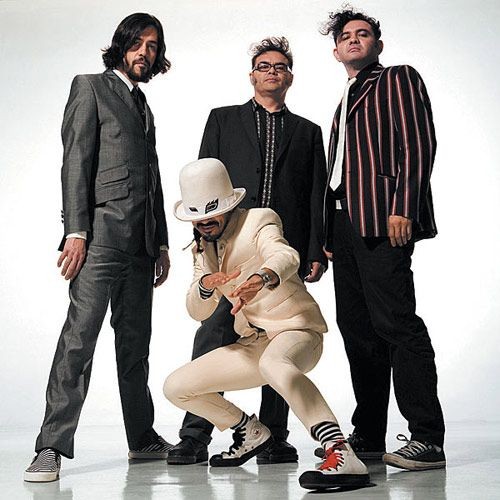 When Mexico's Café Tacuba (aka Café Tacvba) released its self-titled debut in 1992, the world of rock en español was introduced to a unique quartet: acoustic guitar, stand-up bass, drum machine, and a vocalist that wore guarache sandals and straw hat and sounded like a punk charro. Since then, the band reinvented itself with each critically acclaimed album and, in the process, won one Grammy and three Latin Grammys.

The band's style is an unpredictable, smart blend of all that's popular and mundane and the intellectually sublime. They go from Mexican norteña, son jarocho, and banda to all forms of rock, including electronica a la Kraftwerk, hip-hop, and synth-era Who. They sound like a pseudo-politicized Ministry on steroids on one track and on the very next one switch to a heart-melting bolero that talks about how the city is covered by smog and pigeon shit. They're simultaneously funny, serious, socially conscious, and detached. They can rock with raw fury, and they can experiment with an artsy spirit that always goes somewhere. They are, if you ask me, the most complete Latin band and one of the best bands in the planet, in any language.

El objeto antes llamado disco ("The Object Previously Known as Record," an obvious wink to Prince) is the name of Café Tacuba's first album since 2007's Sino. It will be a collection of 10 new songs recorded at intimate live shows in Santiago (Chile), Buenos Aires (Argentina), Los Angeles, and Mexico City. But it will also have parts recorded at the studio under the supervision of their usual production team of Argentina's Gustavo Santaolalla and Aníbal Kerpel. They will play in San Antonio on Wednesday, August 15, at Sunset Station ($40 tickets at jivetickets.com).

If you're not familiar with the band, here's a quick review of Tacuba's key moments throughout their career. — Enrique Lopetegui

This MTV Unplugged version of "Las flores" (originally included in Re) has "the fifth Tacubo" Alejandro Flores on vocals and violin. Trust me: watch the whole thing.

In Tacuba's third album, Avalancha de éxitos (1996), the band recorded their take on songs they grew up with. "Chilanga banda" is a Mexico City slang rap originally included in Odio Fonky, the Mexican rock classic by Jaime López and José Manuel Aguilera.

"La muerte chiquita" is from Revés/Yosoy (1997), a double CD that includes an all-instrumental, experimental first half.

"Eo" is the first single of Cuatro caminos (2003), the first album in which Café Tacuba used conventional drums.

"Eres," also from Cuatro caminos, is one of the few songs written and sang by keyboardist/programmer Emmanuel del Real.