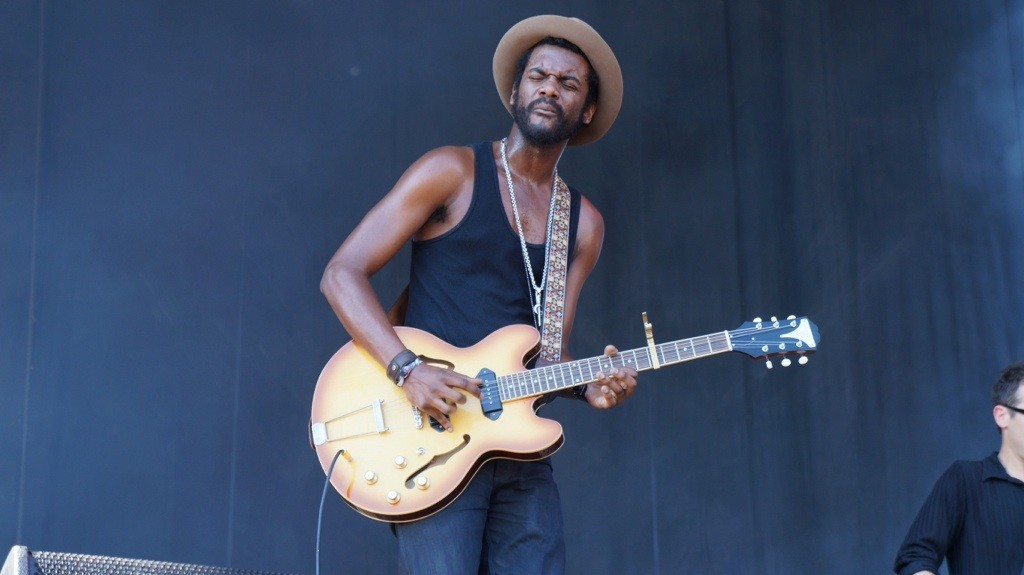 Gary Clark Jr. knows how to start a show — he throws a bomb from the very beginning. Some (especially those with not enough good material) think you have to start slowly, or else "where do you go from there?" Fortunately for the world, Clark has plenty of ammunition. He started his last two shows (Thursday in San Antonio and today at Austin City Limits) with what's perhaps the strongest track in his upcoming album, a bulldozer of a song called "When My Train Pulls In." In Blak and Blu (out October 22), the 7:46-minute track is the second-longest. Both in SA and in Austin, he stretched it even more. So where do we go from there? He made it simple: A handful of rockers, a couple ballads, and his hit "Bright Lights" for dessert. In "Don't Owe You a Thang," from The Bright Lights EP, he let Eric Zapata (who plays both lead and rhythm) shine on his own, and at one point it felt like being front row in Woodstock during Ten Years After's "I'm Going Home." Clark's finger-picking is something to behold — subtle yet precise and edgy. He got the pick for the monumental "Third Stone From the Sun/If You Love me Like You Say," one of the highlights of the new album. He walked around the stage with the calmness of a Zen master and the comfort of someone who knows exactly what he's doing. Even his well-chosen moments of fireworks are not done to show-off but to service the song; something to entertain the crowd for a few seconds before he hits you with a huge guitar history book in the head. Case in point: when he turned into a DJ scratcher for a few seconds. Considering he's one of the most active performers in the major North America Festival circuit, it is amazing how well his voice holds-up. In Blak and Blu's opener "Ain't Messin' 'Round" he maintained his falsetto as it is on the record, and even when he started running out of steam and had to sing softer towards the ends of the song, he managed to hit every single note. Did I say falsetto? In one of the very few times he directly addressed the public, he said "You have a long day ahead of you... I'm going to cool it down." And he proceeded to use his highest pitch in the gorgeous doo-wop of "Please Come Home" (previously released on earlier album, but having its definitive version in Blak and Blu), and he did it beautifully. This is the type of song that, in someone else's hands, could end up in a syrup overdose. But we're talking about Gary Clark Jr.'s hands here — as soon as the song enters its sentimental peak, Clark breaks the tension with an in-your-face solo that reminds us he walks along with the songs, but he's the one who decides their ultimate destination. And he never, ever, likes obvious destinations. "I'm going to stay on this mood right now," Clark said, and followed with the full-band version of "Things are Changin'" (solo acoustic on the EP). It is a fine song, but it pales compared to most of his other material. Sorry. I like my Gary Clark on fire, and I dig his soft moments only when he mixes it up as in "Please Come Home." "This song is about one of my least favorite places: the Travis County Courthouse," he said, and proceeded to crush "Travis County," one of the many high points of Blak and Blu. His set could not have ended better: he mixed a subdued, guitar/drums-only version of "Blak and Blu" (I even prefer it to the one in the album) with a ferocius incarnation of "Bright Lights." The song's closing words resonated loud and clear: "You're going to know my name... You're going to know my name... You're going to know my name." You bet. — Enrique Lopetegui